Bikinis has closed on Avenue C 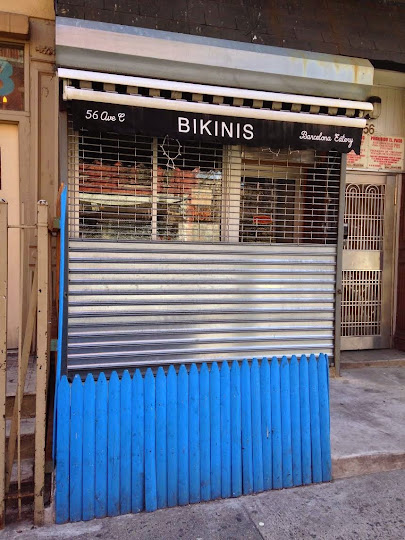 Bikinis, named for a style of sandwich from coastal Spain, closed for good after service Sunday night at 56 Avenue C near East Fourth Street.

The tipster who told us about the closure noted, "So sad. The food was good and unique for this neighborhood."

However, several residents who live in the apartments above claimed that Bikinis was a lousy neighbor. (Bikinis also apparently had a no laptop policy — even when the place was empty.) Back in March, CB3 denied their application to extend the space into the empty storefront next door and in the rear yard.

Previously on EV Grieve:
About Bikinis (sandwiches!) slated for Avenue C
Posted by Grieve at 5:00 AM

Oh man!
Such amazing Patatas Bravas. This was a tiny slice of Barcelona right here in the EV. It will be sorely missed.

I know the name refers to a sandwich in Spain, but it doesn't translate well. It sounded tacky. Business owners need to do more research before their name their businesses!

I knew the owner was looking to sell, but this comes as a bit of a shock as word of a possible sale was in conversation only about a week ago. I loved the food and the staff. This place will be sorely missed.

Never ate there but I don't think that has anything to do with the name. I'm a little confused how a no laptop policy in a tiny place makes you a lousy neighbor? were there other reasons?

Learn the recipes and make them yourself. People really need to be spoon-fed, don't they.

Good Riddance. I tried this place a few times and each time it found a new way to annoy me. The food and service can best be described with a resounding "Meh".

No laptop policy? GOOD. If I knew that I would have gone. Like a civilized, polite person. Sick of laptops taking over places.

I cried for three blocks after finding Bikinis closed. Their tortilla was as good as any in Spain, among many other dishes. Having tapas in such proximity warmed my Mediterranean heart. I'll miss this place.