More on the closure of East Village Bed & Coffee 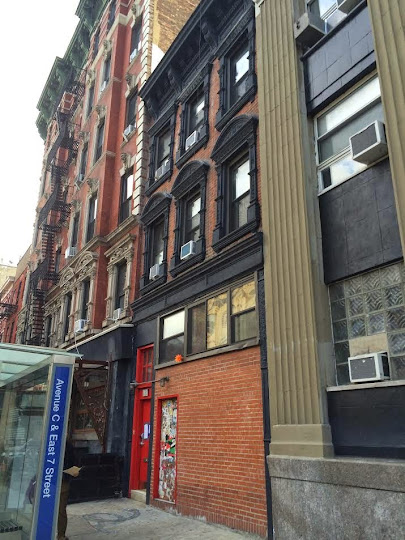 The city shut down East Village Bed & Coffee, which operated as a bed and caffeinated-beverage breakfast these past 16 years at 110 Avenue C near East Seventh Street, in late November.

Last week, the Observer took a deeper look at the bed-and-breakfast issue in the city … and talked with owner Anne Edris, who was licensed to operate the facility, and paid state, city and hotel occupancy taxes for her business.

She was one of the many operators who got swept up in collateral damage during the state's ongoing fight against Airbnb.

Ms. Edris sits at her kitchen table, surrounded by manila folders of zoning and codes, tax returns for a loan application, and copies of her violations. “My dad just died, I’m absolutely broke, and my mother’s ill. It’s just too much at once,” she said, “New York City is becoming this heartless City.”

Ms. Edris has been a denizen of the East Village for 22 years. “There’s been so much support and friends and family and love and effort put into this business. That’s what hurts the most, the thought of having to walk away.”

i don't know this person or her business but it sure sounds like she dotted all the "Is" and did things the right way. and is being punished for honesty.
isn't there something we in this neighborhood can do to help her (aside from money that not everyone has)?

Her argument is a poor one, though. If the renovations are only $15K to bring it up to code, why can't she raise the funds with the actual building owner? Fifteen thousand to a legit business owner is nominal, especially since she claims she was in the process of making those necessary changes. Bringing your personal problems into it (and expecting sympathy) seems ridiculous. You profited off this illegal business for what, some 20 years? In that case, I think the city has been very good to you. If she's so legit, why can't she get a business loan? In this town $15K is NOTHING.

Read the Observer piece. Get your facts straight before saying someone ran an illegal business for 20 years.

This is obviously the hotel industry teaming up with politicians to eliminate competition. I hope she stays in business.

Anon. 10:13, what exactly is it about the phrase "(she was) licensed to operate the facility, and paid state, city and hotel occupancy taxes" that you don't understand? And if $15,000 is such chump change to you, why don't you start the New Year off right and donate it to her? Not all of us have that kind of scratch, especially not after regularly paying state, city and hotel occupancy taxes.

Quite ironic that this story is running in the Observer as Mr. Kushner owns half the EV and has engaged in the kinda tactics of driving out tenants described in the article.

How is it that someone running a legit business is shut down but people in my rundown tenement can rent out their units on Airbnb? We don't even have sprinklers or fire alarms in the hallways? It makes no sense. Airbnb rentals should have to be up to the same standards someone running a B&B must stick to.

It seems to me an awful lot of businesses in the EV are closing. Anyway of knowing if the EV has a higher turnover rate than the rest of the city?

I urge her to start a Kickstarter. I am sure there are plenty of us out there willing to kick in a few bucks, and maybe other small businesses tired of being pushed out will be willing to help, too.

For once I agree with Bill the libertarian etc.

Elected officials are busy trying to come up with workarounds so that legit B&Bs like this one aren't collateral damage in the legit war against Airbnb and the Manhattan Borough Pres expresses surprise that in the meanwhile, the mayor's illegal hotel Task Force is busy targeting these same legit B&Bs that pols are trying to save...Why would that be? The only thing I can think of is that this has something to do with the hotel industry. Maybe not so much the corporate owners of hotels, but perhaps more the politically powerful hotel workers union that played such a big role in killing Bloomberg's midtown east rezoning plan, giving di Blasio and Garodnick the space to come up with their own (better IMO) plan.

@ 10:31
Sorry. To clarify, she had lost revenue AND Sandy related damage that cost her $150,000. However, my point still stands that your "$15,000" amount is no where mentioned in the article. At a minimum, she is being told that she would need to install the sprinkler system and at least one, if not two, fire escapes.

To everyone: There was a link to this article (or the one before it) that said she needed $15K. It's gone now and been changed to one linked to a completely different site. That's where I got $15K. If it was reported in error, it wasn't mine. Something just doesn't add up here, though. Why would anyone put money into a building that she didn't own anyway? One article says she started making the necessary changes, one claims she didn't. The bottom line is NYC wants her hotel out. I notice how nobody wants to speculate on how much money she earned while doing this. Big deal, she paid some taxes. Apparently not enough.

Are you reading articles from a some bizarro world internet? Why do keep saying she doesn't own the building? Where was that stated? As for how much money she's made running her business; what's your point? That it's her own fault that she doesn't have the money to fix her issues? Maybe you're right, but that doesn't change the fact that she got caught up in a law that, by the law's author's own admission, was not aimed at establishments like hers.

I don't believe for a second that this woman was licensed to run a B&B or hotel of any kind. She may have a NYC business license, but she's been in violation of zoning and Fire codes all along. The article is very vague on details. I don't think that this woman owns the building either. She may claim poverty now, and hardship from Sandy, (we lost over $300k!) but she's made a hefty profit for 15+ years and never made any real effort to run a legitimate hotel in full compliance. The truth is, she's done very well for herself operating in the grey area of the law and now that the city is enforcing compliance- Now she's suddenly a broke victim of the system? NFW!