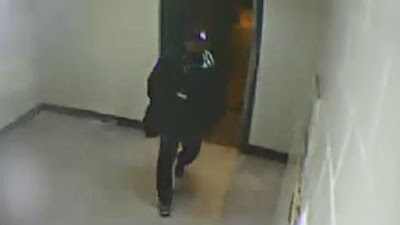 The NYPD is looking for a man accused of sexually assaulting a 22-year-old woman inside an East Sixth Street apartment building early yesterday morning.

According to NBC New York, the man allegedly followed the woman into the building at about 6 a.m. and sexually assaulted her in the stairwell. The victim was treated for minor injuries at Beth Israel.

WABC has an interview with the victim here.
Posted by Grieve at 8:32 AM

Scary. If any neighbors do have info about the cross street etc., could you please share. As a resident of 6th street (currently out of town), I'd like to know. And hope the woman is doing okay.

In the video, it looks like the door was left wide open. Please, for your own safety, make sure you close the door behind you by keeping your hand on the door knob and pushing or pulling it closed. Self-closing doors are very unreliable and too slow in closing.

Is there a valid reason for not stating the race of the suspect? Yes lock tge doors and be aware. At 6am was she coming home from work? Was she drunk? Gotta be careful either way. Hope she is doing ok.

This happen in 920 east 6 street between avenue D and fdr drive.and the doors be locked but if u pull them hard they pop open..

NYPD policy change, they no longer state the race when describing suspects. It was deemed bias.

I'm not sure that I'm right, but I am wondering if the lack of a full description of the suspect is a result of the so-called "Community Safety Act," which passed the Council despite then-Mayor Bloomberg's veto.Or maybe its just a sign of a world gone completely insane. Maybe we should also remove any description of the suspect's clothing. After all, sometimes good people wear "dark baseball caps" and "blue jeans." I'm surprised they listed the suspect's gender. Or species.

Indicating the race of an active and as yet unarrested and unidentified violent criminal is clearly racist. Move back to Kansas if you can't understand that.

Indicating race is racist move back to kansas? Really move yourself to the boobie hachet. It is a physical description like tattoo or red hair.Put out whatever can help capture this felon that's the priority his rights can be protected at trial.

"Indicating the race of an active and as yet unarrested and unidentified violent criminal is clearly racist."

More appropriately, move back to Staten Island if you don't understand sarcasm.