The Checkers sign on 1st Avenue is looking so Checkers-ish 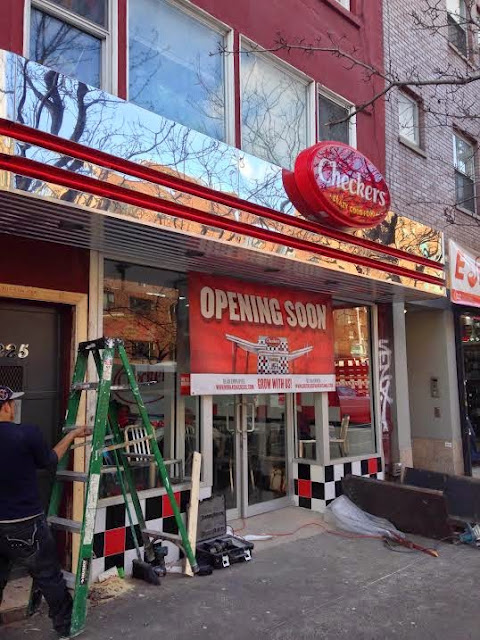 OK! Apologies for TWO Checkers-related posts in one week. But! We hadn't seen the Checkers signage for ourselves at 225 First Ave. between East 13th Street and East 14th Street … until yesterday afternoon.

Look how it gleams in the afternoon sun!

We actually don't know a thing about Checkers. According to the Checkers franchising website: "Checkers Drive-In Restaurants, Inc. burst onto the burger scene with their over-the-top flavors in 1986 in Mobile, Alabama."

And what do they serve?

"Burgers, Wings, Seasoned Fries and Shakes, if it's over-the-top flavor you're looking for you'll be sure to find it at a New York Area Checkers."

In April 2013, Crain's reported that Checkers was going to add another 22 restaurants in NYC by 2015.

So maybe we better get used to seeing them.

Previously on EV Grieve:
Checkers headed to 1st Avenue
Posted by Grieve at 4:35 AM

Not garish at all.

And you know, the kids, like all kids, love Checkers and I just want to say this right now, that regardless of what they say about it, we're gonna keep it.

According to Gothamist almost all of the best new 14 restaurants in NYC are located in the East Village. Unfortunately for Checkers they didn't open in time to make the list.
Gothamist Disses Rest Of NYC

If they have tater tots, I confess I'll have a hard time staying away.

This saves me the time, trouble and expense of moving to Cincinnati. Thanks, Checkers, and all you other great big wonderful gleamy plastic and aluminum chain stores and restaurants, for removing all those grody old brick mom and pop stores that offered only personalized service, a neighborhood feel and a sense of history.

I can hardly wait.

Another chain is bad enough - and IMO not even tasty. Actually, food at McDonald's is better than Checker's.

I'm not gonna lie, I was the person who previously commented about how excited I am to finally be able to eat Checkers french fries here in nyc. While I am still excited about the fries lol, I'd rather have 0 Checkers in nyc than any number greater than 2.

22 restaurants by 2015?! WTf. Even if those 22 restaurants are spread out evenly among the five boroughs that is still FARRRR too many Checkers in nyc. In already gentrified or historic neighborhoods, a Checkers would be an absolute eyesore and immediately detract from the neighborhood's appeal and innate character. In less wealthy neighborhoods, a Checkers would take the place of a potential local establishment/small business or healthier dining option, which is the exact opposite of what those neighborhoods need. Jeez. How is this even allowed.