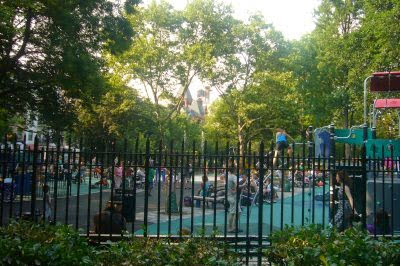 A 39-year-old Harlem resident died yesterday when a tire swing struck him in the face in Tompkins Square Park.

According to the Post, the man, identified as Aleim Perkins, took his niece to the playground off of East Ninth Street at Avenue A.

While the girl was playing, he began “aggressively swinging” an empty tire swing, which hit him in the face, knocking him unconscious and causing him to bleed from the mouth, a police source said.

EMTs took him to Beth Israel, where he was pronounced dead.
Posted by Grieve at 1:46 PM

This is horrible. Very sad. I would never imagine that could be enough of a blow to be fatal, but must have caused an internal hemorrhage.

Oy! More than twenty years ago I witnessed a girl on the chain swings, knock a girl flying. I really thought she was a goner. She went down flat on her face. Luckily, she stood up and shock herself off and ran to her moms arms. So sorry for the fellow with the tire, and his niece. I hope that they don't shut down the tire swings.

May he rest in peace. What a horrible way to go and what a trauma for his niece-and all the other little kids on the playground who had to witness such a terrible freak accident.

What a sad tragedy for the kid and family, condolences to all.

This is why they city is removing those metal spinning contraptions in the new stainless steel playgrounds, kids try to hang on but just go flying and are getting hurt.

It's also why the city has removed many of those big kid long-chain swings with the metal seats that you could stand up on. Kids could pump-swing 10 feet up in the air, those things were dangerous. I think a few are still around but after this accident I bet all but the metal bucket baby swings will be gone.

He could have had an aneurysm, which would be essentially a ticking time bomb. Any tiny trauma can set those things off. Truly sad and just incredibly bad luck.

But why was he aggressively throwing the tire around? Granted,this is sad. Now Parks will now take the tire swing down and no one will enjoy it.

Holy crap. I just came from there. What a bizarre a way to go. That explains the weird vibe. Well, the vibe is always crazy in there actually.

My husband loved to swing the kids pretty hard on the tire swing until around 2000 a cop told him to calm it down.

I'm sorry to hear about this. I know the tire swings in question. Lots of people have swung them the way I imagine he did. It's hardly "aggressive". I never thought it could kill someone though.

So the swing was swung so hard and high that it hit a grown man in the face? Or was he bending down and pushing it? I don't understand how this happened. What a horrible accident.

My daughter and her babysitter were there. The babysitter saw everything. She described how the man and two teenage guys were playing with the tire by tossing it back and forth, jumping it as well as rotating it around high and fast and dodging it.,Sadly, he tripped and momentarily lost track of the tire and it smashed into him. I've swung this same tire-like object in a similar way myself and noticed how very different it was from the pliable rubber tires of my youth. Hard and heavy is the new one. She also mentioned how she timed the ambulance response as 15 minutes from when the first of many 911 calls was made. Also she noted that the NYPD responded first-in a very casual way-ambling over and very cavalier. These two facts-combined with the callous official language which described the poor man'a actions as "aggressive" make me not very happy with my city's first responders in this case.,Sad day.

poor guy!! RIP young man, so sorry to hear this.):

Bad behavior by an adult and two teenagers in a child's playground. His behavior wasn't just aggressive -- it was stupid, inappropriate and dangerous for himself and as well as every nearby child. Sadly he paid for his poor decision with his life.

yeah- nearby adults thought something bad would happen and it did. That's no reason to call people stupid. Especially not dead people. That's just bad form. Troll somewhere else troll.

So it looks like a rubber tire, but it's actually solid steel covered in plastic, disguised as a rubber tire. That's an accident waiting to happen. He might have bee being "aggressive" (that description sounds like an attempt to stave off a law suit), but he probably thought he was playing with a tire.