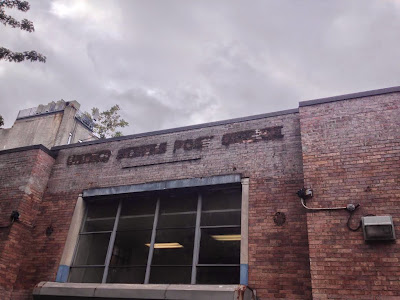 Here are more details about the 8-story retail-residential building coming to the former Peter Stuyvesant Post Office on East 14th Street near Avenue A.

As we noted Wednesday, the building will be 96,000 square feet, with 8,655 square feet designated for the retail space. Plans also show a total of 114 apartments.

According to New York Yimby, landlord Benenson Capital Partners, which has owned the through-block site since 1983, the development "would be made up of a north and south building, fronting on East 14th and East 13th Streets, respectively. The latter would rise to eight stories and the former to seven, with between five and ten apartments per building per floor."

"The residential lobby would be located on the ground floor of the 13th Street building, while the nearly 9,000 square feet of retail space would sit in the north building, fronting on busy East 14th Street."

No word yet on timing for the new building(s). Demolition permits were ordered in October to bring down the post office and the former Stuyvesant Stationery shop next door.

The former Peter Stuyvesant Post Office will yield to an 8-story residential building
Posted by Grieve at 5:00 AM

Will any of these apartments be classified as affordable, or is that just wishful thinking?

It frustrates me that people didn't fight to save the old location. So now it's the SOS in a crappy new location. Losing that old location to what's coming was bad for the neighborhood.

this was an interesting tidbit in the YIMBY article...

"The project should benefit from an improvement proposed by the MTA, if they can win funding for it – a new entrance at Avenue A for the First Avenue L station. The new entryway (which would come in addition to elevators) would ease crowding at the existing staircases on First Avenue and funnel more foot traffic towards Benenson’s planned project, in addition to generally allowing shorter walk times from Alphabet City to the L."

@28YyearsEVresident That is great news! that 1st ave entrance gets so crowded.

Its the worst feeling when you've walked from Ave B to 1st ave down the stairs to see a crowd 4 rows deep trying to push into that first car.

I end up walking back down the platform the same way I came and have often thought, gee I must be right in front of the post office, wish there was just an entrance here.

lazy people! Just walk and work with what you have. MTA is a slush fund & blood sucking machine

It really pisses me off that it's taken real estate self-interests as this to motivate MTA to finally put in another entrance. That shows how much respect they have for the indigenous -- well, second generation at least -- folks down here.