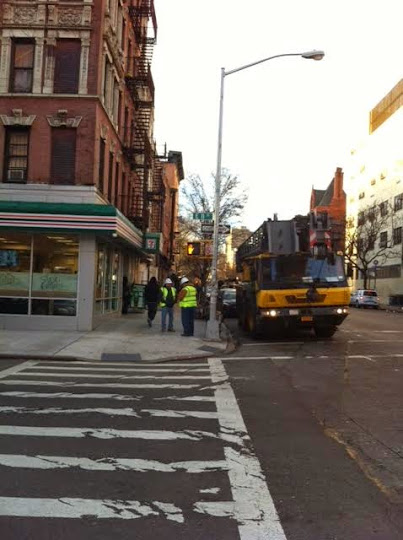 More than 15 months after 7-Eleven installed three noisy refrigeration units in an alleyway between 500 and 502 E. 11th St., workers arrived this morning to move them to the building's rooftop where they hopefully won't keep neighbors up all night.

Back in October, the Department of Environmental Protection ordered the Avenue A 7-Eleven to stop using the units, saying they violated the city's noise code. At the time, 7-Eleven reps said that they needed more time to sign a contract with a company to move the equipment. Landlord Westminster City Living claimed that 7-Eleven had refused to meet with them to discuss the ongoing issue. 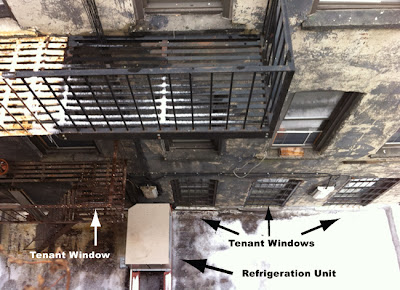 [Photo via the No 7-Eleven Blog]

The crane was originally scheduled to arrive last Thursday, but the company had to amend their plans the day before the lift.

Upon hearing that news last week, one resident wrote, "We are at our emotional ends — exhausted beyond belief. We were fantasizing about the use of our living room for a Christmas tree (instead of a cluttered bedroom), and now we will have to wait… until when?"

The wait appears to be over… as these photos by Brian Katz, one of the residents who has endured the noise, show… 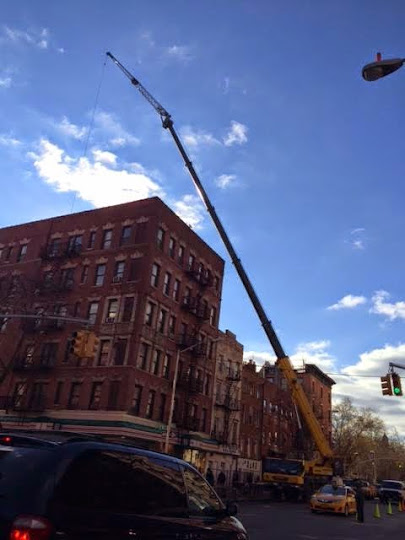 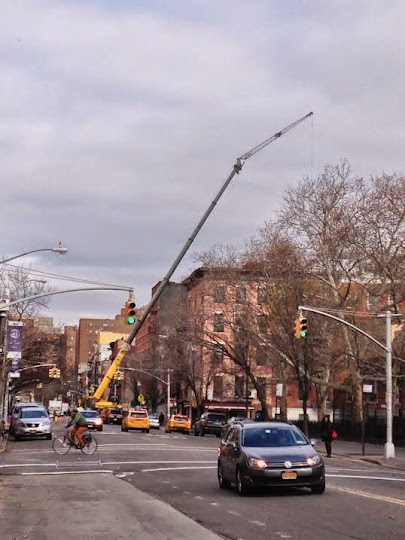 Report: 7-Eleven's AC units have forced residents from their bedrooms on Avenue A & East 11th St.

Judging by the way 7-Eleven has handled things residents on the top floor better be prepared for improper installation and mounting of the units resulting in ceiling vibration and noise. It takes a lot of expertise to get that right and that doesn't seem what 7-Eleven is into.

Good luck. In 2003 We fought Verizon on the corner of 13th / 2nd for sneaking a 'cooling tower' on top of their roof - the size of not one but TWO Semi-Trucks. They tried adn tried to gloss over the fact that our entire building was shaking constantly, until a kind & honorable engineer acknowledged it, and then we took it to CB3, and they were forced to spend 5 Million insulating the roof. Stick to your guns - the roof one won't be much better. Use CB3, and do like we did, get the old folks involved if you can.

Yes it does take a long time to get that kind of thing right!

I'm surprised no one ever shot those things up or purposely broke them.

the bendy thing saves the day! I hope this resolves the issue for the people in the airway and doesn't cause any new problems for the top floor. These situations cause a kind of PTSD. Our government and health departments do not acknowledge how unhealthy this noise and vibration is.

also possibility of roof leaks if its being drilled into.

I hope it doesn't bother the neighbors on the upper floors. These old buildings were not designed to accommodate businesses like restaurants and shops that need refrigeration units, and the ad hoc solutions created aren't working.

Quality of life so depressing in East Village.

9:06, that should be on the billboard we make to keep the insipid consumerist suburbanites from landing here.

The real nightmare will end when this travesty of a business is driven out of the corner it is defacing.

I'd like to say that moving these to the roof will be the solution, but I think the top floor tenants are now going to possibly have to deal with this.