Fight continues to save the Church of the Nativity 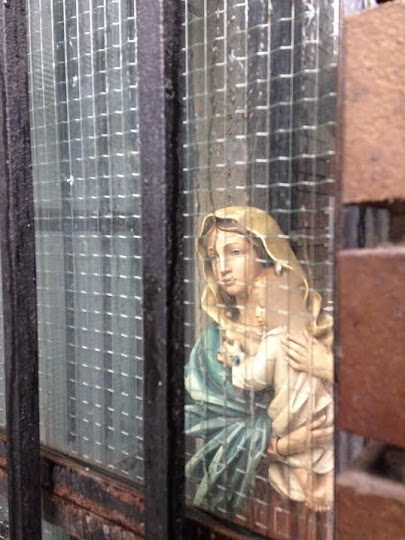 [Outside Church of the Nativity]

As previously reported, the Church of the Nativity on Second Avenue between East Second Street and East Third Street is on Cardinal Timothy M. Dolan's closure list as the Roman Catholic Archdiocese of New York undergoes a massive reorganization. (Under the plan, the church would merge with Most Holy Redeemer on East Third Street between Avenue A and Avenue B.)

The Wall Street Journal reported last week that "at least 18 parishes are now seeking recourse with the Vatican to overturn or limit the scope of the imminent merger."

And the Church of the Nativity is among the parishes at various stages of the appeals process.

Last Tuesday, two parishioners visited the Archdiocese of New York to read Nativity's decree letter, the official document that states the reasons they want to close the church. According to the Keep Nativity Open Tumblr, the reasons given are a change in demographic and a decline in priests.

We have been speaking with canon lawyers and according to canon law, a decline in parishioners and decline in priests are not valid reasons to close a church. We are seeking recourse with the Vatican.

The Archdiocese cannot sell our building within a two-year period

We are fighting the merger, and the closing of Nativity. If we do merge with Most Holy Redeemer, Nativity’s parishioners need to stay united because we might have a chance to keep the building from being sold in two years. (The Archdiocese can’t sell the building for another two years). If Nativity’s parishioners are separated and divided, the Archdiocese can easily sell our building. But if we are united, we may have a chance to save Nativity when that time comes.

As for a timeline on all this. Back to the Journal:

An appeals process can take years, according to canon lawyers and church advocates around the U.S. The process, they say, is a complicated, highly technical one, following a strict timeline and involving several benchmarks set by canon law, the regulations set by the Catholic Church.

Previously on EV Grieve:
Parishioners fight to save the Church of the Nativity on 2nd Avenue
Posted by Grieve at 5:25 AM

In the last act of Goethe's play, Faust is an old but powerful man favored by the king, and he is very concerned about global warming. He has dikes and dams built to push back the sea, and builds a castle on the reclaimed land. (Church of the Holy Redeemer). An old peasant couple lives nearby next to a modest chapel. (Nativity Church). Faust is irritated by the couple and so Mephistopheles has them killed, still operating on the terms of the wager. Faust promptly goes blind, and henceforth can only see ways to better the lives of his subjects. Has he lost it all? Angels appear at his death (from the Marble Cemetery), drop rose petals on the demons, and carry off Faust's soul into the beyond. . .

Don't stand in front of the cannon.

I am sympathetic to their cause and I wish them the best of luck. However, perhaps if they took better care of the area around them, the neighborhood community might be more supportive. The entrance to this church and the sidewalk area around it have always been a poorly maintained disgrace. It is dirty, and full of trash. Drunks and drug addicts congregate on the steps at all hours. I have even seen drug dealing. One often has to cross the street to avoid the seediness and filth which is ever present. Quite frankly it is disgusting and I have never understood how the Catholic Church has allowed it to go this far.

I hope they can save their church. It's been around since the 1800's and the current community in the parish is very active and alive.

The archdiocese just to sell it and make $$ to cover its own debt.

Re: the prior comments, when was the last time you walked on the block? there is no trash outside of the church. unfortunately, there are times the homeless and other addicts congregate on the stoops, but the church is clean.

Churches are a place for the poor & the like. From the sounds of your post I'm highly doughtful that you would give them a hot meal or a blanket. It's not the suburbs it's real here.

I live around the corner on East 3rd and walk by there a least 4 times a day. And there is trash there every day, and it is filthy, and indeed lit is a product of the addicts and the drunks who congregate there.

I have never once seen the church hose down the steps or sweep the sidewalk the way all other establishments around them do every single day. It is a disgrace, and it has been bothering me for decades. None of the other churches up 2nd ave have these conditions or problems and there are several of them, one is less than 100 feet away.

I was raised a Catholic and have tremendous respect for the church, but this particular one has never been very neighborly with the way they handle the maintenance and security of their entrance. I have considered writing the archdiocese to complain.

The Church of the Nativity has been tolerant of homeless and poor people for years. After all it is the east village and for decades the neighborhood was filled with such people. Moreover, it is the parish church of the Catholic Worker - Dorothy Day dedicated her life to the poor - but it has always kept its steps clean and free of refuse and garbage.

However, the times the pastor called the precinct to ask that particularly difficult homeless be removed met with mixed success. The maintenance man, who lived in sight and regularly cleaned the front of the church also engaged the homeless when they congregated there. The police were helpful, but we do not live in a police state. Many times the police informed the pastor that they could not just remove someone because they were sitting or selling things there. The police would come, the homeless would move on, but then return after the police left. I think newer residents forget or ignore this context.

Comments about how Nativity has been unfriendly or inconsiderate of its neighbors in this regard are unfortunate. Poor people are a part of the east village. Many of the people who gathered in front of Nativity came from the various homeless shelters that exist in the area. They would tell the pastor they had no place else to go when they were bundled out of the shelter each morning.

... How do I know this? Because until last March, I was the pastor. I was the one who for 7 years, spoke with the police argued with the homeless and helped them maintenance man clean the front of the church. In that time not one person came to me and complained about them. Had they I would have explained what I just wrote above. Perhaps we could have worked together to find a solution that would have been beneficial to all.

Reverend. I have no doubt that you do good work there, but please remember that your church is not open to the drug addicts and alcoholics who congregate there outside. Why do you not open the doors so they can move in to a safer space?

and In fact, your church is never open to us Catholics who are looking to a church to pray. I remember as a 20 year old, 30 years ago, thinking that this was not a real church, because it was never open. I was shocked when I learned this was a real Catholic church.

Reverend. You need to know what your neighbors think of your church

I know that if the door to my home was this filthy and shady, and unkempt, I would certainly have figured out a way to make it better decades ago.

Reverend. I have no doubt that you do good work there, but please remember that your church is not open to the drug addicts and alcoholics who congregate there outside. Why do you not open the doors so they can move in to a safer space?


Actually, there are a few AA meetings held here every week, and they are perfectly welcome to attend these. One is even in Spanish, in case that applies.