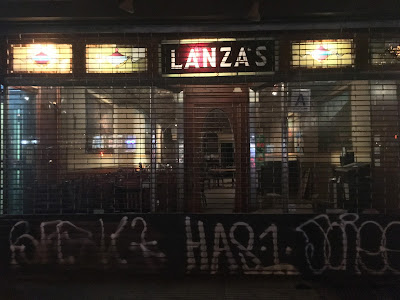 Joe & Pat's, the family owned pizzeria that has been serving up slices on Staten Island since 1960, is opening a second outpost — at the former Lanza's space on First Avenue.

Owner Casey Pappalardo told Eater, who first reported this news, that he and several uncles will be running the outpost and expect to open the 50-seat restaurant with a bar in the next six months.

Eater has more on the pizzeria's thin-crust pies in this 2015 video feature here. 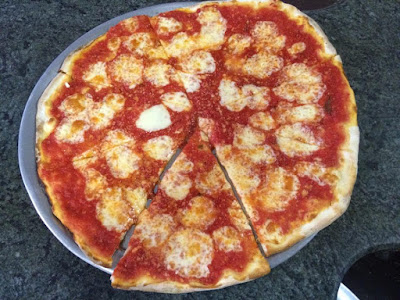 The old-world Italian restaurant, which first opened in 1904, sat languishing until an auction of its contents on Jan. 5.
Posted by Grieve at 4:30 AM

Not gonna lie - I wanna eat that whole thing.

Sorry to see Lanza's go, but this is a win. Been out to SI to Joe & Pat's several times, and it is great.
With Luzzo's, Motorino, Numero 28 and now Joe & Pat's, the north end of of the EV will a pizza epicenter...

I grew up in SI in the 60s and 70s with Joe & Pats as our neighborhood hangout. It definitely spoiled me when it came to finding good pizza.

Hoping they just leave it the same recipe and style and let the whiney yelpers go eat their poke bowl somewhere else.

It should be a great addition to the EV!

this is simply pretty great. Lanza's didn't have much going for it except longevity. Joe & Pat's is legit.

I hope they leave the stained glass.

Also a Denino's pizza opened in the west village last year. Are we being invaded here???

An addition to the East Village we can celebrate!

So many pizza places, yet this looks like really good pizza.

Best pizza to come to ev , Staten Island has the best pizza in ny, if u don't think so your clueless to pizza.