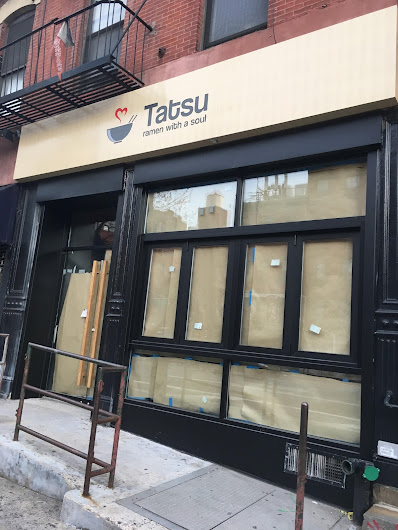 Tatsu Ramen, with two locations in Los Angeles, is opening an outpost at 167 First Ave., two storefronts away from Momofuku.

Buzzfeed named it one of the best ramen places in Los Angeles:

You are greeted at Tatsu Ramen by iPads, not people. You select your order on the touch screen, grab your receipt and then take a seat. We ordered two bowls of the the default-vegan "Hippie Ramen." It's a garlicky bowl of veggies, fried tofu, and delicious noodles. You can add more flavoring at your table, including crushing your own garlic, but there was no need. It already tasted great.

"You are greeted at Tatsu Ramen by iPads, not people."

And that is what is wrong with society and why I will never set foot in this place.

How modest theses folks are, they only used the "best" 3 times in their blathering promo.

Dammit, this was supposed to be a barbeque joint, not another ramen slop shop. And I echo 8;52 AM's sentiments, if you can't be bothered to hire a human being to say hello to me when I walk in, you can go screw yourself, you won't get a cent of my money. So sick of this "technology is superior to both people and cash" crap.

Get outta here with that ipad crap! I'll be across the street at Joe and Pat's instead! (I hope!)

Do these people even realize how pompously dumb they sound?* Deconstruct THIS!
* Rhetorical question

"USC family" (whatever the heck that means). Strike two.

Wait till you see the prices... STRIKE 4.

Just gonna make a few edits... and, here we go. "Order ramen with an iPad. Dragon."

Arrogance. They think they can do better than everyone else, just by flying in some chefs from Japan. And then by reinventing the tired, old-hat mode of foodservice. This thing reeks of venture capitalism. There are already great bowls of ramen served up by humble, local-based artisans. Such as Minca on 5th St, Kambi on 14th and RaiRaiKen on 10th.

Sorry but any random Yelp page is more credible than a Buzzfeed list. And just for the sake of disclosure, that list is billed as "9 of the best vegan ramen in Los Angeles". Far cry from "one of the best ramen in LA".

I, again, commented here, as a jest, that the next restaurant would have a menu where it can only be viewable via an iPad and one can only order by an iPad.

And, back in the '90s, i know some folks who have money to throw away, and they like Thai food so much that they opened up one. It did get rave reviews. Needless to say, that didn't last long. Ramen is the new Thai food.

"It has since become an LA institution that’s frequented by A-listers, hipsters and blacklisters." Noted.

I missed the whole iPad thing for some reason when I first glanced this article. The sad truth we are heading to a non human customer service in just about everything except maybe the highest end retail. Have any of you visited the newly remodeled Cooper Hewitt Museum lately? This decorative arts museum now has more iPads on the wall then exhibition pieces. Visitors are encouraged to use a pen like scanner at they walk around the museum to scan bar codes of the exhibition pieces so they can download later at home. No thanks I want to read about the piece while it's in front of me, otherwise I would save the long subway ride and get my own iPad out instead.

Agree with Anonymous at 1:16pm
Love RaiRaiKen on 10th Street

Wow I love Tatsu and wonder how the competition will handle it? Best ramen out there I mean it's incredible. Have any of the above commenters even eaten there? I really doubt it... It's coming to NYC!

The ONLY ramen place I go to in LA!!! I can't wait to enjoy it in NY too!!!! :D
Also this place serves great ramen, I don't expect it to fix the problems with society :)

I had ramen from Tatsu at the LA branch before and it was DELICIOUS. I mean there were iPads but then the servers took care of me in the entire process after the iPad part. So, don't worry guys!! When it opens, you will experience it, and love it as much as I do :)!!

I don't get how people hiding behind "Anonymous" can just rape businesses that are not even open yet, food they haven't even tasted yet. It is ironic you complain about the iPads and restaurant you haven't experienced as you're typing away the meanest comments hiding behind a screen. And oh, I won't be going to Minca nor RaiRaiKen now that I know what kind of people eat there.

@Vivian: Overheated, much? "Raped", really? I think you need to go sit down somewhere and gather yourself.

BTW, "Vivian" you also are typing away YOUR mean comment while hiding behind a screen and (for all I know) a fake name! Do you work for this restaurant or its owners? Are you affiliated with it in any way? You *could* just be shilling for them, for all I know!

I have been to their LA location and the lines are always out the door because it is so good! The iPad ordering is quite amazing I think, you are in control of your order from start to finish. You still get amazing service from the staff once you complete your order and then the host will seat you at a table. When you go to any other busy restaurant you are busy waiting up front for a table anyway so how is this any different? The staff is always very friendly and keep an eye on your drinks once you are at a table and they do interact with you. When the lines are long there are staff that do go out and greet people and interact with them, so it isn't entirely devoid of humans like some people are claiming. Quite the seamless experience and no different than a traditional fast-casual restaurant in my opinion. I mean some McDonald's have the touch screen ordering systems too so don't hate.

This comment page has been taken over by shills/friends of proprietors and probably the proprietors themselves. Extremely sad, transparent attempts at chicanery. You are not fooling anyone.