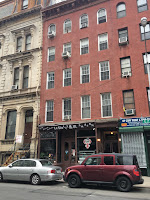 I hadn't heard anything from readers about the restaurant, which serves Chinese barbecue, seafood and an assortment of kebobs. The dining room was empty the few times I walked by during the winter.

However, as Eater noted yesterday, Le Sia is catching on, especially with students.

Eater's Robert Sietsema paid a visit and came away impressed. (The headline: "NYC’s Most Exciting New Chinese Restaurant Dares to Pile the Heat on Seafood.")

Beyond the seafood, the menu also offers robust menu of other Chinese dishes — many of them offered here for the first time outside Queens. It’s a bold move; many of the newer Chinese restaurants in neighborhoods outside of immigrant enclaves like Sunset Park or Flushing either come from restaurateurs with experience in Western-style restaurants (like Little Tong) or offer water-downed versions of traditional Chinese fare (like Han Dynasty).

Hunan and Sichuan restaurants nearby already stir fry fresh green chiles with sliced pork or pork belly, for example, but here, fiery peppers are instead tossed with gluey cubes of pig trotter, with a texture something like melting gummy bears. Called “wok-fried hog hoof jelly with pepper” ($16.95), it’s one of four chef’s specials. Another less-known dish available here is a “dough drop and assorted vegetable soup” ($12.95), a comforting tomato broth with free-form dumplings.

For now Le Sia is BYOB, making it one of the better restaurant deals in the neighborhood, and also one of the most exciting. With a restaurant right in the East Village, the owners clearly have faith that people other than first generation Chinese immigrants will dig the foods of their hometowns — it’s pure genius that may pay off in a big way.

Previously on EV Grieve:
Le Sia opens today on 7th Street
Posted by Grieve at 9:26 AM

Last year Eater had a headline on a Robert Sietsema review, "New East Village Noodle Shop Is Nothing Short of Spectacular. Yuan opens in former Biang! space."
It wasn't (spectacular), so some healthy skepticism is in order when you read Eater.

I miss the old school Chinese restaurants that for some reason are closing down, especially the Szechuan and Hunan joints. No Cantonese for me, too bland. and thats not because I just like the Americanized tyle of cooking, I have had excellent Chinese food in Hong Kong and probably the best Chinese food I ever had was in Singapore, but the new ethnic Chinese places opening up have such a localized regional flavor that it must be an acquired taste.

There used to be an amazing dim sum place on Chatham Square where I would go to lunch, with the little carts rolling around with steamed buns. It was delicious and packed with Chinese families on the weekend, but even that one is gone now. Chinatown has more and more Vietnamese ans Thai places now which seem busier then most of the Chinese restaurants.

Sammys Noodles in the West Village still has some great cold sesame noodles and veggie sir frys, and old standby Mee Noodles on 1st Ave. is still around, but as a vegetarian these new places serving pig innards and octopus entails just aren't very appealing.

I guess it’s time to trek back to Congee Village on Allen St., which makes amazing chow fun noodles. And the nice thing about these remaining old school Chinese restaurants is they are all affordable, which is probably why they are all vanishing.

I've eaten there three times since it opened. The food is great, the service is pleasant but inefficient. I'd say it has earned the hype.

I have eaten there 2 times
The first time I was there for 3 HOURS and it wasnt even full.
The second time the shrimp dish smelled like a rotten bluefish. I sent it back and they CHARGED ME FOR IT or tried to
Half of what you read on Eater is paid hype
avoid this place

I'm excited just reading about it! Beyond benches, Le Sia also offers robust seating options like the front stairs, the hood of a parked car, and the sidewalk out front. Others are also so exited by Le Sia, so you'll need these options as you wait to be seated inside Le Sia. It's a bold move but worth the wait.

Other nearby restaurants sell the exact same thing at a fraction of the price without making customers wait for a table in the toilet stall - but do they have gluey cubes of pig trotter? I don't think so! The GCPT is what makes Le Sia so exciting! And - wait for it - they serve it in a hoof, just like fro-yo! Hold my hand, I'm getting lightheaded from the excitement of it all!

It passed. Whew! For now, Le Sia offers and exciting BYOB, making it one of the better deals in the neighborhood for a reason I can't quite put my finger on, but it's genius!

Let me know if Le Sia have added milk crates and postal crates for seating option.

@JQ Will do! That would so exciting!