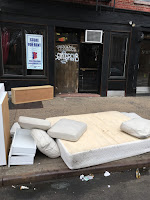 There's not too much information about the unnamed project here between Seventh Street and St. Mark's Place. According to the questionnaire on file at the CB3 website (PDF here), the establishment will serve "New Age American food."

The proposed hours: noon to 2 a.m. daily. The seating chart shows 14 tables to accommodate 62 guests as well as a 14-seat bar.

The previous occupant, the Black Rose, closed last April after nearly two years in business. No. 117 was the longtime home, until August 2013, of the Odessa Cafe & Bar.

Cheng's name is also attached to an application at 304 E. Sixth St. between First Avenue and Second Avenue. Again, not much information on the questionnaire for view at the CB3 website. (PDF here.)

The food is described as "New Age American/Pan-Asian." The proposed hours are daily from 5 p.m. to 2 a.m.

This address is currently Mayahuel Mariposa, which was Mayahuel. There was some reported conflict over rent and naming rights after Ravi DeRossi and Co. departed and building owner Keith Siilats reopened the space under the same name. (Eater has a recap here.) Now it appears Siilats has a new team taking over the operation.

The CB3-SLA meeting is tonight at 6:30 in the Public Hotel, 17th Floor, Sophia Room, 215 Chrystie St. between Houston and Stanton. Other applicants this month include Bubbleology Tea and the team behind Entwine eyeing the former Golden Market.

Previously on EV Grieve:
The Black Rose, 'a neighborhood rock and roll bar,' opening in the former Odessa Cafe and Bar space (73 comments)
Posted by Grieve at 4:05 AM

Email ThisBlogThis!Share to TwitterShare to FacebookShare to Pinterest
Labels: 117 Avenue A, CB3, SLA

did i post this? sorry if i posted it twice
tere's not too much information about the unnamed project here between Seventh Street and St. Mark's Place. According to the questionnaire on file at the CB3 website (PDF here), the establishment will serve "New Age American food."

what is "new age american food"
perhaps it's the stuff created in a test tube and "grown" by cloning
just what we need, i can't wait

I'm pretty sure it's an acai poke bowl served in a hoof.

I have no respect for anyone who would lease from 9300 Corman Realty.