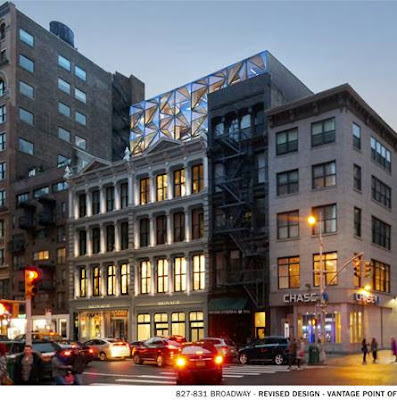 A revised proposal to add a (slightly smaller) four-story glass addition to the landmarked buildings at 827-831 Broadway between 12th Street and 13th Street returns to the Landmarks Preservation Commission (LPC) this morning.

Back in January, LPC commissioners told the design team to return with a revised proposal, as Curbed reported. (Find a PDF of the new proposal here.)

Last November, the LPC voted to landmark the circa-1866 cast-iron buildings where artists Willem and Elaine de Kooning and Paul Jenkins, among others, lived and worked. That decision spared the address from demolition. As previously reported, Quality Capital and Caerus Group bought the parcel in 2015 for $60 million.

The Greenwich Village Society for Historic Preservation (GVSHP) campaigned for more than 18 months to help preserve these buildings. Read more about their efforts here.

The LPC rejected the plans, per the GVSHP...

Great news! @nyclandmarks again rejects plan for out of context glass topper for 827-831 Broadway, 1866 former de Kooning studios we fought to get landmarked and save from wrecking ball!@CarlinaRivera @DeborahJGlick @bradhoylman @LizKrueger pic.twitter.com/JnYEV78kUc

There's a proposed addition for the recently landmarked 827-831 Broadway

Report: LPC rejects glassy addition for landmarked 827-831 Broadway
Posted by Grieve at 4:00 AM

How does anyone think this is a good idea? This is an aesthetic train wreck.

Seriously, what is it about the term "landmarked" that developers don't seem to understand? If they don't want to be bound by restrictions on what they can do to change a building, they shouldn't buy something that's been landmarked and then whine about what a hardship it will be for them if they can't destroy the integrity of the original construction. Vampires!

It's just as ugly the second time around. what is it with these developers... They just hate to lose. PLAY FOOTBALL!

I think it looks kinda cool and I normally hate this stuff.

Gojira,
The buildings were landmarked AFTER the developer bought the property AND had DOB approval....

I've always liked de Kooning's work but unless his studio is preserved and open to the public it means little to me. It's not like van Gogh's room at Saint-Paul Hospital, where you can see where he lived and painted and even the garden and wheat field that he painted...