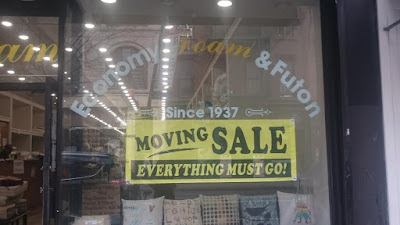 EVG reader EJ shared the above photo... showing that Economy Foam & Futon is leaving its home of 15 years on West 8th Street between Fifth Avenue and Sixth Avenue.

They close at the end of the month. But they're moving to Chelsea, though "under new ownership." The gent there said it'll be a much smaller space, so there will be many fewer offerings. Still lotsa stuff there at a discount before the move.

Economy Foam & Futon was a Lower East Side fixture, anchoring the corner of Houston and Allen from 1937 to 2003...maybe you bought a futon there... 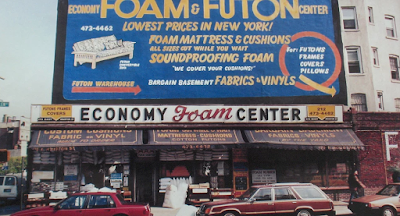 I can NEVER forget this place or location. Their side wall on Allen Street was always just a WALL. Presto Magico it was turned into the Sugar Cafe and The rest/bar along side of it and The three Music Hall Clubs. Who could've believed it as I walked along Allen Street all of those years that that WALL would be turned into so many LUCRATIVE (for the developer/owner) establishments.

My memory and photographs show it was not just a wall. Just look at the photo on the bottom of this article, that is Allen Street. It was a very narrow store, part of the adjoining store on Houston Street which Economy F&F occupied. There is a door, windows awning, not just a wall. This building along with others on Allen was narrowed when an elevated subway track was built on Allen Street, 2nd Ave L. The L was torn down. But it was still a building with rooms.

Actually, I DID buy a futon there - several of them over the years, in fact - when I was still young and limber enough to not have a problem essentially sleeping on, and getting up from, the floor!

Wrong..After that awning was NOTHING but a wall stretching to the next corner. I walked by that strip for DECADES. I can never cease marveling how they made that into a lucrative strip of stores.

Chelsea is the hot new place. Ooops. That was yesterday. Chelsea will be dying like all neighborhoods because the rents are increasing like they have in the EV, WV Upper West, Upper East. And once the rents go up tenants become rent poor and can't afford the premium prices for goods and services. And ooops, there goes the empty store... And we wonder why...

I can't believe they've been on 8th St. for 15 years already! I liked the whole thing better when they were on Allen St - I miss the "good old days"!

I just realized why I liked their Allen St. location better: b/c it represented a time when, as a New Yorker, you had to *know* where to go to get certain things (like foam!). It was part of what gave New Yorkers an edge - we were resourceful and exploratory people!

Now, all anyone needs is a computer and an Amazon account - nobody needs to do more than lift a finger to make an item appear at their door.

I liked going into a store like Economy Foam, b/c you'd look around & discover stuff you never knew existed, or get an idea for something you might want to do. THAT is what I miss in the era of online shopping - the interaction between human beings: talking to people (both other customers as well as the staff). You could always learn a little something on those outings, even if you didn't buy anything.

Yup, futon back in the day from Houston street store, then, memory foam from 6th Ave and 8th Street. Thanks for the update on their next move!

For foam mattresses, I far prefer Dixie Foam—originally on 20th street, now in Greenpoint. I have a queen-size duoflex carbamate from them that's well over fifteen years old and still has its spring.

Notably, Dixie Foam's slogan used to be, "Can your mattress hold its wine?" with a picture of a full wine glass standing on one of their mattresses and an elbow sunk into the mattress a few inches away.