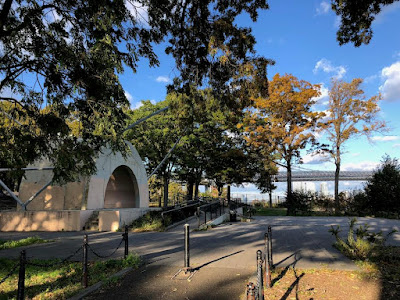 A CB3 committee meeting that wasn't on anyone's radar is now receiving attention.

This is the third item for discussion during tonight's Parks, Recreation, Waterfront, & Resiliency Committee meeting:

It's not exactly clear what is being discussed tonight. (This 6sqft piece from the summer is a good primer on the RFP process.)

In any event, one neighborhood activist is sounding the alarming to help raise awareness in an email sent last night:

This is a devastating NEW PLAN that the City wants to shove through regarding the East River. After a carefully studied plan, The Coastal Resiliency Project, since 2014, after Hurricane Sandy, with Millions of dollars committed by the City...The Mayor's Office in October 2018 wants to scrap that plan, instead will close the East River Park for 2-3 years, trashing all plantings, trees, and wildlife habitats to "raise" the park up 8 feet in land fill. The cost is $1.45 billion. This is an expedited "plan" because there is money to spend — however it is thoughtless, in the end won't work, and will destroy the East River Park as we know it.

The email included a wrinkled flyer... 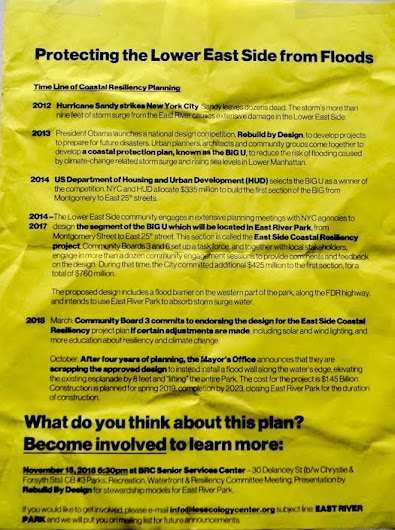 As previously noted, the city's new resiliency plan calls for "lifting" East River Park by up to 10 feet from Cherry Street to 13th Street when work starts in March 2020.

However, to do this, the city will need to close East River Park for up to three and a half years, bulldozing all the current amenities, including the recently unveiled new running track and soccer field, according to multiple published reports. (The Post and CBS 2 had stories on these plans.)

The meeting starts at 6:30 tonight (third agenda item) at the BRC Senior Services Center, 30 Delancey St. between Chrystie and Forsyth.

Previously on EV Grieve:
Report: The reality of storm-proofing East River Park in 2020
Posted by Grieve at 9:58 AM

I propose closing the FDR -- a waste of taxpayer's money anyway, and no asset to our neighborhood -- and convert that into a beam to mitigate against sea-rise, with a bike and pedestrian path atop it, and a flag and flag pole claiming sovereignty over DeBlasio's over-the-top annexation of our parks.

Yes, sounds like a horrific plan. But let’s give whoever their due for acknowledging the need to do something in response the effects of climate change.

I am entirely onboard with closing and removing the FDR or building the seawall on top of the FDR, enclosing it and making the highway a tunnel.

There is zero chance of either option happening. First, the estimated $1.45 billion for this plan means the deals have already been made and someone is about to make a lot of money. Second, the automobile is a religion in this country and so Manhattan will stay an island ringed entirely by highways.

This and the Amazon HQ cements DeBlasio's record as "far worse than Bloomberg". He was always bought and paid for by real estate and he follows orders.

It would make more sense to build a wall around the FDR drive, essentially turning into an above ground tunnel, than to tear down all the trees and thousands of plants in East River Park. What we will actually get is a sterile, gentrified looking park, like the new Domino factory park and Battery Park City, or a corporate controlled park like Madison Square, which is closed half the time for a corporate event or “art” exhibition.

Speaking of “art” there is a great documentary on HBO about the art world called The Price of Everything. Jeff Koons work has now apparently been labeled as lobby art, due to his bunny in the Death Star and other lobby installations. The dealers note how once an artist gets installed lobbies, it can’t get out, and its like the kiss of death. Also noted is how Jean-Michel Basquiat complained toward the end of his life how could not find any art dealer to show his work, they all thought his work was a fad, but the minute he died everyone wanted to show it,

Meanwhile, the prices for works by overhyped artists like Damien Hirst have been cratering as investors realized his art factory creations aren’t art after all, at least not from an investment point of view. I’m sure this kind of corporate art will find a new home in the East River Park 2030 Biennial.

This is disgusting. If the city does this, they will destroy lower Manhattan. Talk about greed, corruption, disregard, and oblivion. I will be outraged if this happens. What about the west side? They have issues too. Why not do that too???