The dog days of Netflix

As you may know, the Netflix series "Dogs" — an acclaimed six-part documentary series — dropped on Nov. 16.

As Vulture noted, "Each roughly 50-minute piece uses the human-dog connection to illuminate social issues, cultural differences, personal suffering, and how our doggos help us understand and overcome them." (And it's possible the docuseries will bring you to tears.)

Episode six is titled "Second Chances," with a focus on dog adoption ... and featuring the East Village and Tompkins Square Park... there are many familiar dogs in the episode... including Miss Kita the Wonder Dog of East 10th Street... 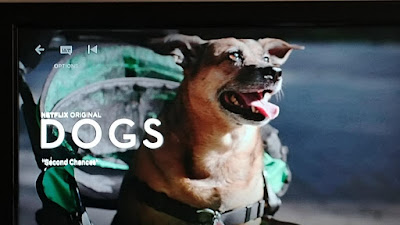 Kita's owners adopted her in early 2012. We asked them about Kita the Wonder Dog of East 10th Street's Netflix debut.

It would be a generous overstatement to suggest that Miss Kita the Wonder Dog makes more than a cameo appearance, but she is beautiful and we love her and couldn't be more proud.

WHAT??? Not even some freakin' Kibble? 'Dat's low, man.
Listen....meet-up tonight down at the big maple.....we gotta get you a manager!

WHAT was that? You don't know how to break it to your people that your seeing a gender-fluid German Sheapard over in Flatbush who wants to make you a star?

Oh brother! We'll toss it around the tree tonight.