You better watch out: Miracle on 12th Street pops up for the holidays 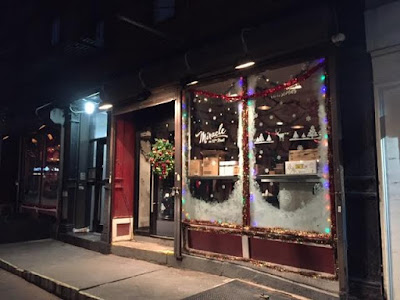 Mace owner Greg Boehm is behind the holiday pop ups, an empire that has grown to 80-plus worldwide.

And as 12th Street residents learned yesterday, there's also a Miracle on 12th Street that just popped up for business between Avenue A and Avenue B in the former Double Wide space... 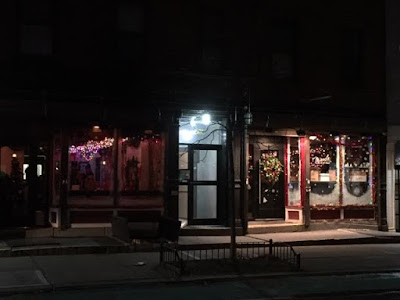 Boehm also took over the lease from Double Wide, which closed back in March after seven years in business.

Apparently the address will serve as a pop up before the planned cocktail lounge opens. Unlike the Ninth Street location, the 12th Street bar will take reservations for five people or more during the holiday.

Said one local resident: "I feel duped as a neighbor. They sold this as an upscale cocktail bar that was going to be quiet as opposed to the loud shit show that we had to endure when it was Double Wide."

And if you need another holiday pop-up choice, Boehm's bar Boilermaker on First Avenue at First Street is now a tiki-themed Sippin' Santa (as it has been this time of year since 2015).
Posted by Grieve at 4:00 AM

How are pop up bars even legal? I live on 12th st and was not please to see this cheesy theme crap going up because it says just one thing, loud drunken assholes are on their way.

just in time for santa con

I live on 12th Street. This pop up opened last night, and already we were dealing with drunken assholes on the sidewalk being really loud and literally screaming to each other about which of two Ubers some of them were getting into. If the owners are reading this, I am begging them to please put up signage asking their patrons to keep the noise down on the sidewalk and to also go out and verbally tell them to keep it down.

I'm a neighbor, this place affects me directly, and I'm still giving them the benefit of the doubt. I spoke to Greg Boehem earlier this week (casually, while walking the dog), and was also at the CB meeting where they were granted their liquor license (but not access to the garden). Greg wants to be a good neighbor, he is legitimately trying. Last night was a soft opening, and I'd guess was a bit more boozy than most nights will be. This location of Miracle will be reservation-only, meaning there won't be a line out front (the biggest fear as a neighbor).

Simply put, this place is a bar. People are going to enter and leave the property drunk, that's how bars work. The owners want to work with us to keep things cordial and keep their neighbors happy. So far, they're been far better than Double Wide, though the jury is still out.

As an FYI, they're planning to open a second location of Mace here in February, after they tear down the pop-up.

I am really hoping they will be a better neighbor than Double Wide because I don't want to have to battle yet another bar for years. On the plus side, many of us neighbors from the surrounding buildings know each other now and are organized, so we can work together to get the local precinct involved again if this place gets out of hand. I hope the new place is the nice establishment they promise it will be. I would be happy to have another chill place in the neighborhood to have a drink.

Hello neighbors. This is Greg Boehm. I am always happy to chat with anyone that has concerns about our plans for the location on E. 12th Street. I myself live on E 10th Street, not far away. We have every intention of being a good neighbor just like my other nearby bar, Mace on E 9th Street.

We are not Double Wide and we will never be that style of bar.

You can always reach me at greg@cocktailkingdom.com

I look forward to meeting more of the neighbors.

they still have not fixed their exhaust fan & the walk in is loud as fuck and they built that in the backyard. so much for saying you want to be a good neighbor, they've been promising to fix the fan, so I went buy & left a not as noise advocate was just doing a site visit to my home, and could not believe how loud their fan was! The property manager called me and told me to not contact his tenants. Mr Boehm is not making good on his promise to be a good neighbor. ^^^^ ironic that Christmas is about spreading peace and joy. I had no peace on Christmas day as I had hoped thanks to their very loud walk in fridge compressor going on and off all day and night. cheers.

These DRUG SELLING bars and UNSUSTAINABLE restaurants are a curse on the residents - we don't need their drug jobs! They make our lives shit. Vigilante action is required.