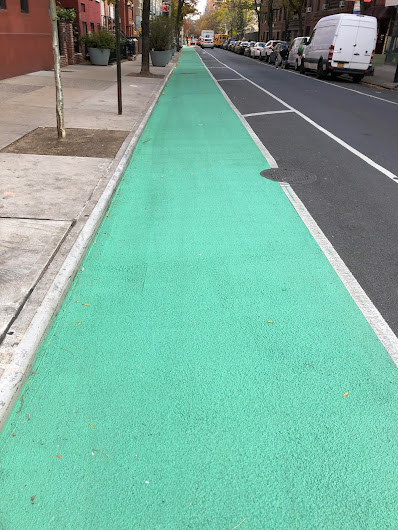 On Wednesday, crews painted the new eastbound bike lane on 12th Street... I spotted them between Second Avenue and Avenue A ... 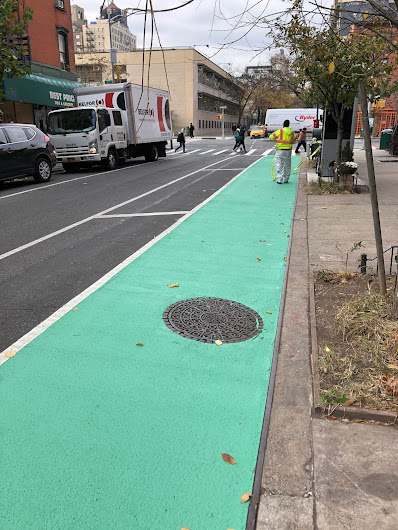 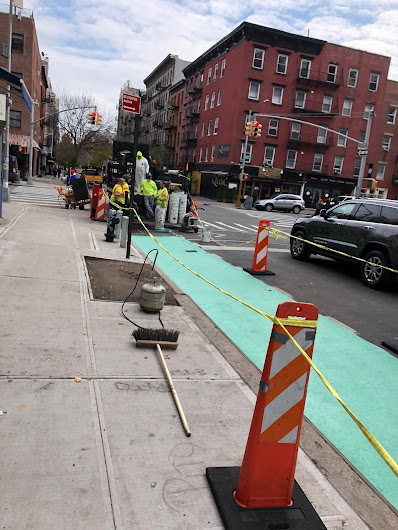 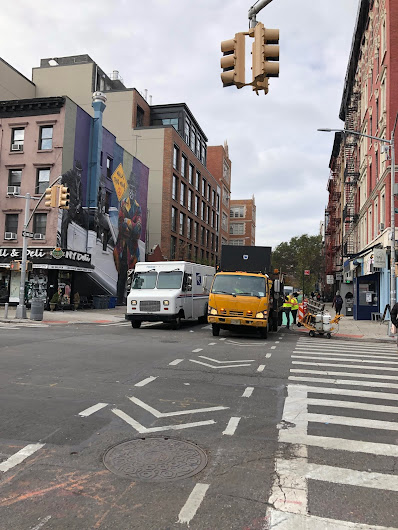 The bike lane for 13th Street arrived at the beginning of the month.

The bike lanes are just one of the ways the city hopes to keep people/commuters moving during the 15 (or so) months that the Canarsie Tunnel under the East River gets repaired.

Previously on EV Grieve:
Prepping for the new protected bike lanes on 12th and 13th streets

DOT puts down the green paint on the new 13th Street bike lane (except for one mysterious spot)
Posted by Grieve at 7:36 AM

Biking is the new punk rock! Seriously, what is more subversive and rabble rousing in 2018? Sure as hell ain't loud guitars and leather jackets and studs. Outside of politics, what pisses off your average person/New Yorker more than a bicycle, or worse--a bike lane?

This is good as it's already all dicked up there. I'm all for bike lanes, especially with all the constant construction in this immediate area and city wide. Gotta make room for all those 4 million dollar studios. What I hope happens with all bike lanes is;

That bike riders follow the rules of the road as they apply to you too! Please remember.
.
1) Pedestrians have the right of way, all the way, all day
2) DON'T ride against traffic!!!
3) DON'T ride on the SIDEWALK in either direction!!!!
4) At least come to a Rolling Stop at INTERSECTIONS
5) ALL bikes MUST have lights and beeps, ESPECIALLY the "ride wherever I want" Delivery Electric bikes. The worst for sure.
6) And...This ISN'T the AUTOBAHN

Bike Lanes NEED to work properly and it starts with the riders. Please remember...I'm just walking here BIKE ON!

What's interesting is that most trucks and cars still park in the green lane on both 12 and 13 streets even with the wider than normal buffer area where they are supposed to double park, which tells us, really, there is no excuse except spite.

If DOT doesn't physically separate a bike lane it's just a standing zone with a coat of paint. Until the private vehicle addiction passes bikes will be the future, deferred. Life, liberty and the pursuit of parking.

You've been huffing green bike lane paint too long, if you think that these adorable little bike lanes and citi bike stations are going to help out during the L train fiasco. This is primarily a means to increase delivery truck ticket revenue, especially since the car-less of Manhattan just love buying everything online these days.

5:00 The bike lane is also an extended sidewalk for brainless pedestrians. And the cops are not going to enforce any traffic violations against entitled wimp bikers and skateboarders paying inflated rents to live here.

9:46 Those electric bikes need to be called what they actually are-motorcycles. There should also be regulations on the douches riding motor skateboards.

c9000 Absolutely right. The city is broke and needs all the revenue it can generate from the subsidies and tax breaks giving to Pacific Park and the Domino development in Brooklyn, the ostentatious tower pestilence in Hudson Yards and L.I.C. and now the insane oligarch welfare deal for Amazon/Bezos.

Does anyone know anything about the green paint used for the bike lanes? They were painting my block and the smell was overpowering. It smelled toxic. The guys doing the work were wearing masks. I couldn't smell it in my apartment but I had to cover my face and mouth as I was walking by because the odor was so strong and toxic. I am worried about what I might have inhaled. I can still smell it on the jacket I was wearing.

The bike lane configuration on 13th st is an extreme waste of space. The DOT should narrow the bike lanes to the same width as the 12st bike lanes and widen the now wastefully unused ‘no parking’ zones on 13th st into much needed parking space.
At present, it is poor design.
I’m speaking as a bicyclist and motorist.