Report: NYCHA tenants on Avenue C have been without heat and hot water since Thursday 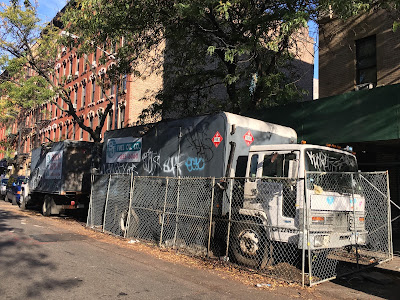 The temporary boilers that arrived after Superstorm Sandy nearly became permanent sitting here for five years on Sixth Street at Avenue C outside the NYCHA-owned building officially known as Lower East Side Rehab Group 5. (The Daily News once reported that a temporary boiler costs $5,000 a month to rent.)

However, a new boiler arrived last fall, thanks to funding from FEMA. Still, by January, residents in the building said that they rarely have heat or hot water, according PIX 11, who noted that the work there was "serving as a model for 17 other projects."

Today, the Daily News reports that the residents have been without heat or hot water now since Thursday's snowfall.

“This is a harsh living condition,” said tenant Neicee Johnson, saying she has no heat and barely any hot water.

She wakes each morning at 5:45 a.m. to boil a pot of water on the oven and turn on two space heaters. Her family, which includes two teen children, sleeps with multiple layers of clothing and blankets.

“We barely hang out in the apartment,” she said. “We are hardly ever home. We go to the local library or community areas until it is time for us to come home.”

Local City Councilmember Carlina Rivera is quoted in the article... she is also tweeting about the situation...

We aren’t going to solve @NYCHA’s fiscal crisis overnight. But with the temperature expected to drop to dangerously cold levels over the next 24 hours, the city must treat this crisis like the emergency it is and bring in resources to fix heating problems immediately.


The residents of LES V, the members of my own staff who live in local public housing, and all the other residents suffering deserve to know if they will be able spend Thanksgiving in their homes without risking their lives.


Back to the Daily News:

Resident Clara Rivera, 91, has also been shivering in her apartment since the snowstorm last Thursday.

“The house is really cold. They give nothing here in the morning or night,” said Rivera, who has asthma and arthritis. "We're dealing with this every day. I'm not going to die from this cold!"

There were an estimated 6,366 NYCHA tenants throughout NYC with the same problem, according to an online “service interruption” tracker, as the News pointed out.
Posted by Grieve at 11:09 AM

Just awful! The city better resolve this and fast!

If a private landlord had the same history as this building and other NYCHA housing with longtime heat problems they would be in jail now. Combine this with the NYCHA lead paint poisoning of children on a laege scale and the coverup and false info provided to HUD by top level NYCHA administrators and you have what I believe to be a federal criminal RICO conspiracy case involving a large number of people. The buck for all this stops on the mayor's desk. Lock him up !!!!

Agreed, the mayor is fully responsible in the end. I'm sure he'll be warm tomorrow.

This problem began long before Comrade de Blasio. The only way to solve it is to de-communize this housing stock by allowing the tenants to become owners with permanent property tax abatements. They would be responsible for fixing and maintaining all the infrastructure, including boilers. This would incentivize them to maintain their property and keep the bad people out, including those with guns. It would also get them off the backs of the long-suffering tax payers. This property was constructed when--when LBJ was dropping Agent Orange in Vietnam? Lying Badass Jackass.

WTF is wrong with this city, that they can't even deliver the most basic of needs: HEAT during the winter to NYCHA tenants?

Turn off the heat in Gracie Mansion until NYC gov't gets a grip on this.

This is the sad result of ONE PARTY RULE. They have been covering each others' butts for y-e-a-r-s. This goes from our council-people to Mayor Bill. And we keep electing them. That's the part that's even sadder. WE ASK FOR IT! We ask for it! We poison the kids. We don't make repairs. We don't give a damn. We vote for the system that keeps problems like this from getting solved, And this is supposed to be progressive government.

No secret NYCHA is a failed Agency that needs to be disband. It's clear its bureaucracy is mired in its own politics and not functional on the most basic of a level working boilers providing heat and hot water. But 328 Developments are not sustainable as they age out and fail. The situation is a hot potato with solutions not all parties will like, but at some point new ideas and actions are required.One thing is clear Federal Funds are not on the Horizon and NYC Middle Class Taxpayer not willing to foot the bill when they are paying more than 30% of income on housing electricity not included. The Projects are truly the Land that Time Forgot but are they destined to be ruins like forgotten Mayan cities?

ONE PARTY RULE is a form of socialismo. Think the state of Cuba. That is how NYCHA is run. Anyone who voted for Comrade de Blasio is a Libertarian-Certified Moron.

Get with peace, free markets and anarchy.

This is not meant to be flippant, but I know from personal experience that 2 to 4 hot water bottles under the covers will usually keep you warm for say 4 to 6 hours.