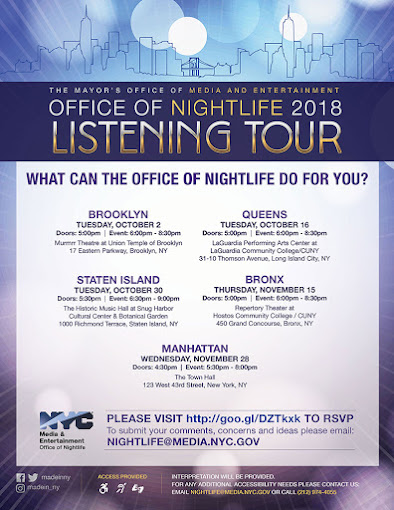 Tomorrow evening, the Office of Nightlife (night mayor!) is hosting the fifth stop — the Manhattan leg — of a five-borough listening tour "to hear comments, concerns, and ideas for strengthening New York’s distinctive nightlife."

Here's more from a press advisory via the Mayor’s Office of Media and Entertainment yesterday morning:

Established earlier this year within the Mayor’s Office of Media and Entertainment, the Office of Nightlife serves as a central point of contact between City agencies, nightlife business owners, residents, employees, and patrons, promoting a safe and vibrant nightlife scene beneficial to businesses and communities across the five boroughs.

Aside from Palitz, attendees will include Julie Menin, commissioner of the Mayor’s Office of Media and Entertainment, Gale Brewer, Manhattan Borough President, and other local elected officials.

Neighborhoods United, a coalition of citywide block associations, is helping spread the word about the session. Nora Breen, a rep for the group, says that to date, there hasn't been adequate advance notice about the listening sessions, especially within Community Board 3, where there are multiple quality-of-life issues related to nightlife and liquor-license saturation. (CB3's district manager, Susan Stetzer, is also one of the 14 members of NYC's first-ever Nightlife Advisory Board, appointed back in July by the mayor.)

"The Nightlife Mayor's Listening Tours in Bronx, Queens, Staten Island and Brooklyn have been poorly publicized and stocked with nightlife industry insiders," Breen said. "So far, the voices overwhelmingly weighing in are from developers, bar/hotel/club operators, lobbyists, liquor lawyers and nightlife insiders."

In its coverage of the Brooklyn stop last month, Bedford & Bowery reported that Palitz was "truly surprised" how few "residents" came out to speak.

And leading up to tomorrow night's event, Neighborhoods United distributed these flyers... 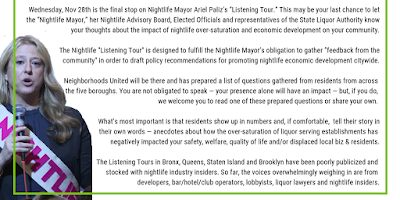 The Town Hall is at 123 W. 43rd St. between Sixth Avenue and Broadway.

Previously
Posted by Grieve at 4:10 AM

The night parliament will be there too.

What a waste of time. It's just all the usual suspects, developers, hotel and night life industries circle jerking with each other.

Guarantee no citizen will show up at LaGuardia, it's going to be deserted. But in Queens, There was a guy working at a club in Woodhaven who got shot in the face and killed. There have been 4 or 5 other incidents involving riots and stabbing deaths.

Since Ariel has been crowned mayor (sash and all, glad to see they isolated that pic. she looks like an idiot) "rap" superstar Cardi B was involved in two incidents where she and her crew assaulted people. And that clown Takshei six nine were involved in shooting incidents in two others.

That poster reminds me of Thank God It's Friday.

what they can do is close down and save the money. this night life office is a waste of time and a way to bypass procedure.
the city is in the process of taking the community out of the community boards (almost complete) by creating mini government "office of", commissions, "friends of", like this one for night life. useless.
they are just another way to do things without community input.

want to see how bad things can be - watch a few city council committee meetings and hearings and see how much the members care about community input.

Unfortunately I work during these hours, as I'm sure many who are trying to afford the high prices for housing in the neighborhood. If it was my job to open a bar, or sell liquor it would be my job to be there- I sincerely hope some can come out to represent my interest in sleep and enforcing the zoning laws regarding saturation of bars in the area.

Yeah, way to make sure the majority of the people most adversely affected are not able to go - have it in a neighborhood that is not geographically near the most highly-impacted neighborhoods of the EV/LES, make it start at a time when many people are just getting out of work, and have it on a November weeknight.

Wow, way to bury this news effectively, oh "nightlife mayor"! Don't announce it weeks ahead; get the news out a day beforehand, when people are *just* back to work after the Thanksgiving week, and OF COURSE hold your event in a different neighborhood (MIDTOWN), b/c of course OUR neighborhood is only for drinking & puking in.

Of course the attendees will be all the people who pay-to-play in NYC nightlife; for sure De Blasio has their backs.

I hope to God that the next mayor of NYC does away with this entirely; we should NOT EVER be paying a "nightlife mayor" or anyone else (other than NYPD) to deal with the shit that goes down when partying goes on and on and on.

And the idea that Palitz is going to do anything useful for our area is a plate of fried nonsense.