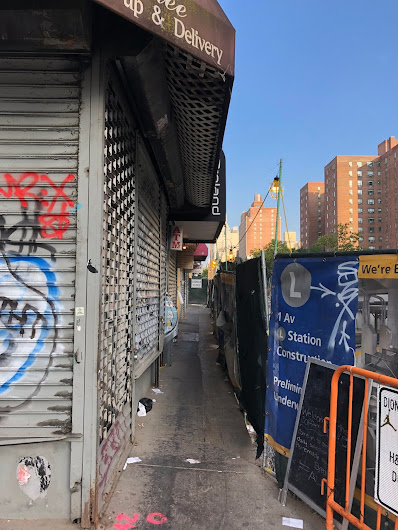 There is improved pedestrian access now on the south side of 14th Street between Avenue A and First Avenue, the main construction zone leading up to, and during, the L-train rehab.

As the above photo from September shows, access to the five businesses west of Avenue A was limited to two feet-plus of unappealing sidewalk space that came to a dead end outside the Domino's Pizza outpost.

Meanwhile, most of the pedestrian traffic was diverted to the temporary sidewalk passage set up between the active construction site for creating entrances and exits for the L train at Avenue A and the two lanes of 14th Street. 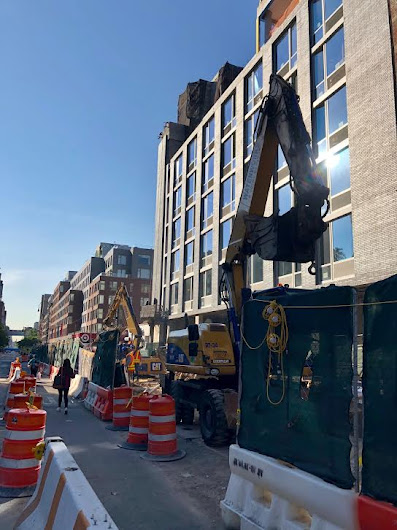 The past week, however, the sidewalk situation was reconfigured on the south side of 14th Street... where pedestrians can now walk along the storefronts and away from traffic... 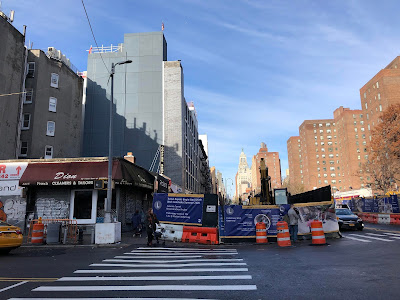 The sidewalk is now a little wider ... 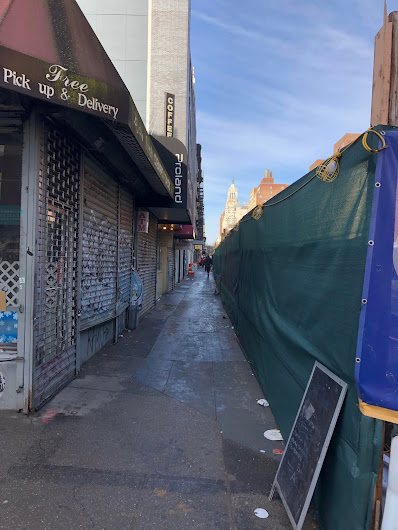 ... and you can still walk on it to First Avenue and beyond... 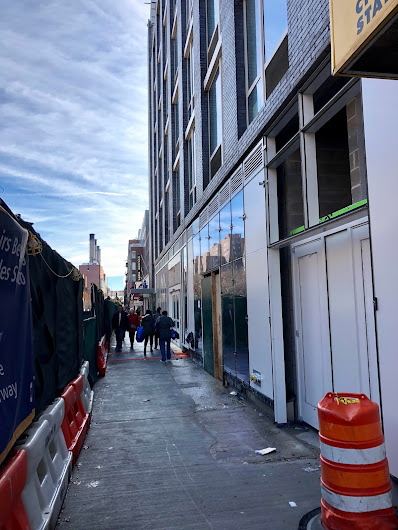 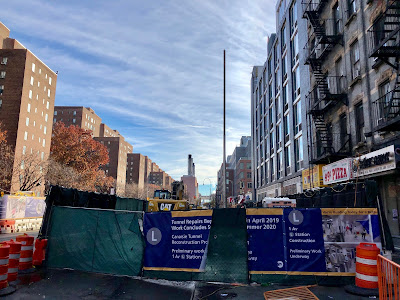 A positive step, though it may be too late — five businesses have already closed between Avenue A and First Avenue... while other retailers and restaurants report a decrease in revenue.

Per an article from The Villager on Nov. 15:

The employees at the Red Apple Barbershop, west of the string of shuttered shops, fear the 10-year-old shop could be next.

“Most of the foot traffic is on the road,” said Michael Vostok, the shop’s manager. The street pattern for construction sends passersby into a pathway in the streets and makes it difficult for Stuyvesant Town residents — critical clientele for the retailers — to both see and reach the shop.

The work here on this part of 14th Street started in July 2017 ahead of the L-train closure between Bedford Avenue and Eighth Avenue that starts on April 27, 2019.

A look at the new L-train renderings along 14th Street
Posted by Grieve at 4:26 AM

Have my fingers crossed the "Yellow Diner" along that little route stays above water.

I have no idea why the city does not factor some money into their budget to help little businesses like this stay afloat when they are so hideously impacted by building projects. If it has hundreds of millions of dollars to give away in tax breaks to developers, why not make it part of the deal that the developers, in turn, must help to keep the mom-and-pops they are disrupting financially afloat during construction? Why are the small ones thrown to the wolves?

@11:52am: Exactly right: WHY are the small shops thrown to the wolves?! WHY are the needs of small businesses never taken into account in these situations? If NYC set out to deliberately wreck mom-and-pop stores, they could scarcely do it better than this.

I've walked that block going east (walking in the supposedly-protected road area, which is uneven, a tripping hazard, and NOT lit in several places, so yes, very dangerous) - and there's no way I could have reasonably gotten to the businesses behind the horrible fence.

Small shops are thrown to the wolves because our shameful mayor doesn't give a shit. He is driven by his own self interests and greed. It never fails to infuriate me how NY is corrupt and managed with a mafia like mentality. None of it does or will ever make sense. And much of it is indicative of the tier system from City Hall. When De Blasio is lazy and apathetic AF, what do you expect from other officials? He is failing and raising the bar with how to be a corrupt asshole.

If only we lived in a perfect world, would there be money allotments for small business owners. It makes me sad how they are closing down and going away.

Thanks for the nudge; I'm going to make sure I spend more of my pet dollars at Petopia—which, while it may not be in the danger zone of shunned businesses, is probably still losing business to the construction on the block.

Yes, it is tragic that our mayor is so self-absorbed that he can't even get his head out of his [expletive deleted]. Remember kids, not voting isn't the way to get him out—voting him out is.

What exactly does the anti-DiBlasio contingent expect him to do? Give free money to businesses because they aren't doing so well?

Just another example of the complete callousness that the MTA has shown to the neighborhood. 14th St along A and B is pretty much unlivable for the residents. Expect 2 more years of this as Ave A morphs into the entry and exit point for all the L train work, and they start trucking out their silica and asbestos contaminated material on a 24/7 basis throughout our neighborhood.

And yes, in a more just and less corrupt world, these businesses would be getting subsidies to see them through- not Amazon.