There are reader reports of branches/trees down this evening on Sixth Street between Avenue A and Avenue B (thanks Riian Kant-McCormick) ... 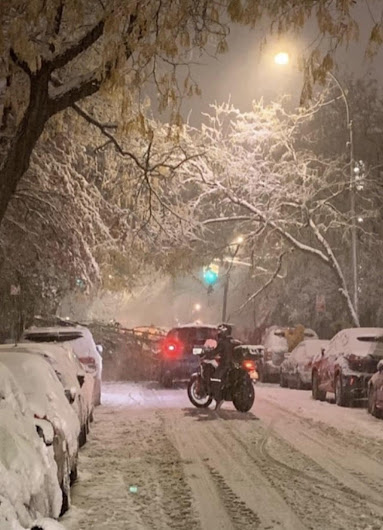 11th Street between Avenue B and Avenue C (thanks Brian P. Katz) ... 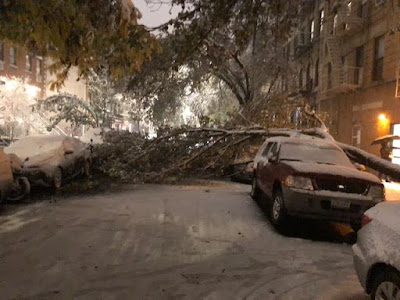 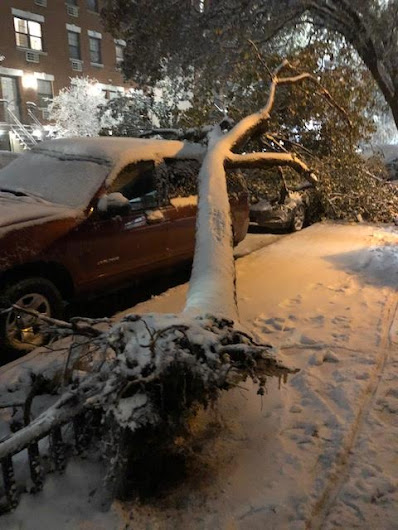 Another view (thanks Brucie!)... 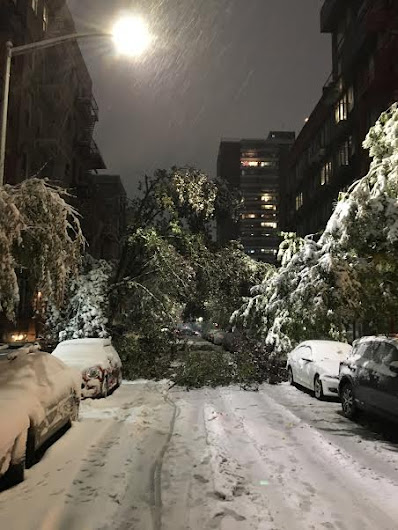 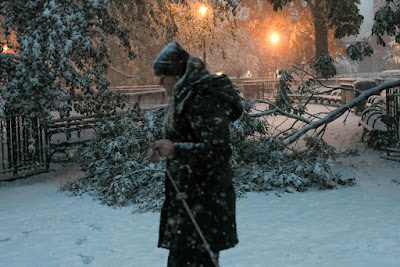 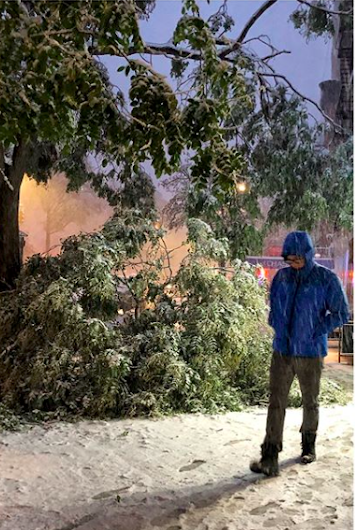 ...and several branches down on St. Mark's Place between Second Avenue and Third Avenue...

Actually all of st marks is downed trees. pic.twitter.com/0jLBCxU1r5

Here's a report on the downed trees, still full of leaves, via NBC 4. ... The combination of the leaves with the wet, heavy snow was too much for some of trees.

Snow brought down a massive branch of a tree across East 10 St. and Avenue C. Neighbors came out of their apartments and stores to help clear the street.@evgrieve @edenbrower #FirstSnow #snowday #nycsnow pic.twitter.com/84dfLcay8i 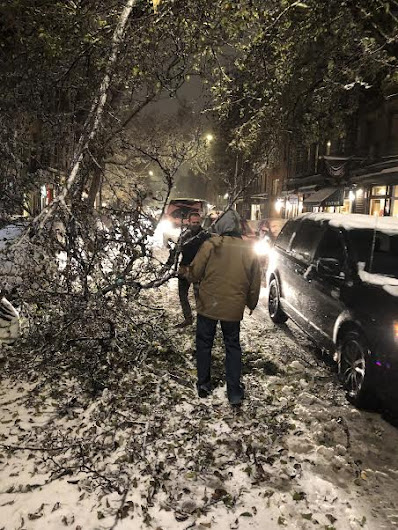 EVG reader Helixx C. Armageddon shared this from Suffolk and Stanton ... the police officer on the scene said that three people were injured, though the severity of their injuries isn't known... 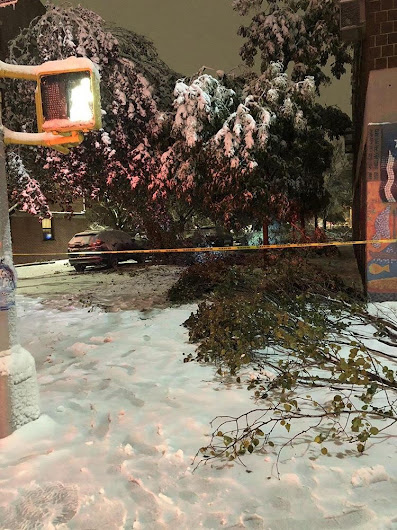 EVG reader Lauren notes down limbs on Second Street between the Bowery and Second Avenue ... and on Bleecker ... 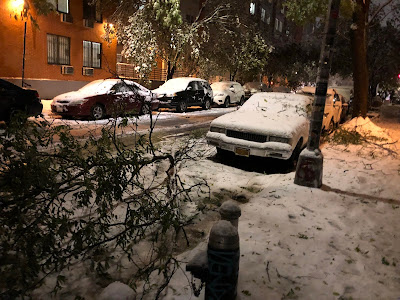 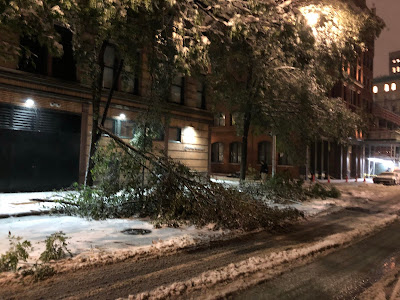 Fifth Street between Avenue A and Avenue B (thanks @jeffchatterton!) ... 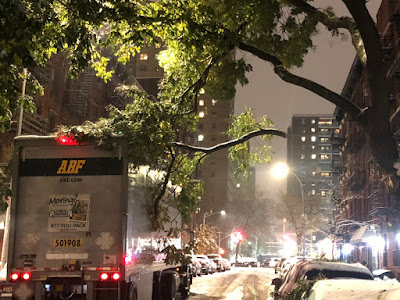 Fourth Street between Avenue B and Avenue C (thanks @artisanmatters) ... 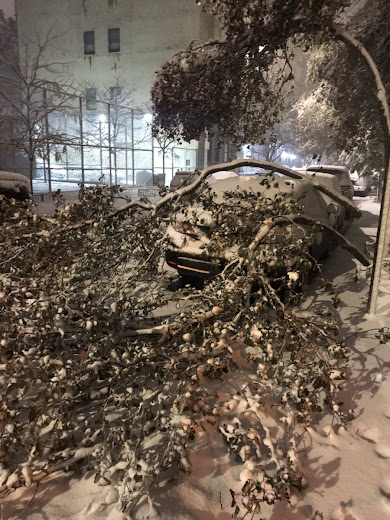 14th Street between First Avenue and Second Avenue (thanks Pinch)... 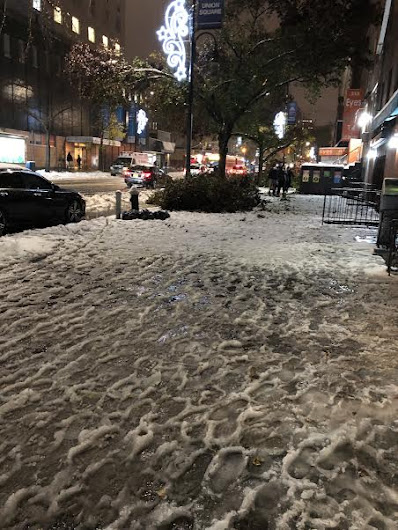 9th St. between First & A has three big branches down.

Pedestrians have turned 10th Street between 2nd and 3rd Avenues into a tourist attraction, taking photos amongst the huge fallen branches and trunks, with no regard for the fact that more trees could fall on them at any time. I've reported the situation to 911 three times over the last hour plus, and other than posting a police car on 3rd Avenue and East 10th to prevent cars from driving down the block, they've done nothing to prevent dozens of people from endangering themselves by meandering down the block. People are literally picking their way around giant fallen tree trunks and branches, stopping to chat and take photos, with no awareness of what could be happening right above their heads, and the city is doing nothing to stop them. Sad and really dumb.

Tonight would be a good night to rewatch The Ice Storm. Trees are down all over the West Side, from Hells Kitchen to the West Village. Cars are stalled on the 59th St Bridge, and total gridlock has set in. St Marks Place is like a war zone. I bet Tomkins Square Park will be a big mess. I heard that StuyTown around the Oval is also hard hit. I’m worried about the damage that will be done to the trees in East River Park. This snow is wet and heavy, and sleet just started falling. Stay inside tonight, its brutal out there.

These branches are perfect for the WickerMan I am going to build in the park soon! The city demands a sacrifice.

Also several branches down on 9 St between Broadway and University, and I saw a news story that over 150 trees have been downed across Manhattan...

it's treemageddon I tells ya!

I saw on Citizen App that a tree fell on a car injuring 3 people I think and trapping them. That was when I woke up at around 1pm(yup)!

Why so many trees down today, when it really wasn't that much snow? I don't remember this many trees coming down during legitimate blizzards in the past. Is it because it's the first snow of the season?

The combination of snow, rain and the wind froze all these trees and when the humidity rose in the late afternoon early evening probably had an effect. And also that these trees are probably old, but also haven't been inspected by the city's parks dept (bad forest management?) I saw at least 10 trees toppled and about 40 large broken branches last night.

Our city has had freezing rain before but I have never seen a large amount of trees collapse and break off in one night. It's had the effect of mass shooting by a nut with an AR-15. It was like these trees were hosed with carbonite, which yesterday's storm kinda was.

As for other stupid judgements by stupid people like these instagrammers, the city was guilty for not salting the road prior to the storm like they have done for the past decade and not having plows out there removing the frozen and slick snow, giving the impression that they thought the following rain would wash it away. Doormen and supers of luxury commercial and residential building clearing their sidewalks pushing the snow(which was actually barely two inches) into the street exacerbating the conditions creating a moonscape of chunky ice. And just now the news showed that the MTA didn't order to put chains on the buses tires and the sanitation commissioner is providing spin by blaming all the traffic that got snarled on an accident on the George Washington Bridge.

Freezing rain is still coming down this morning so people better be aware of their surroundings. It's certain more branches are going to come down this afternoon, when the sun come out to melt the ice on them.

Not sure if anyone mentioned this yet but I believe the timing of the snow and the fact most trees still have most of their leaves is a big factor. Notice all the tree fallen have leaves which caught a lot snow increasing the weight.

That too. Great catch. The fact being that the last few autumns in New York have seen above normal temps and the trees are still green even in mid November.

So sad. These trees were beautiful and will be missed. I bet the stupid Parks Department doesn’t even replace them.