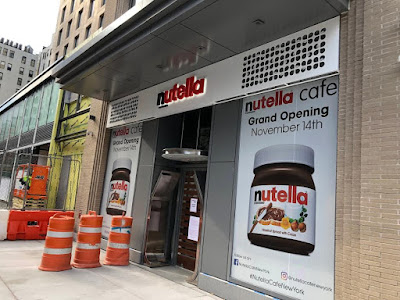 EVG reader Doug shared these photos (from Sunday) from outside the Nutella Cafe, which opens today on 13th Street and University Place... 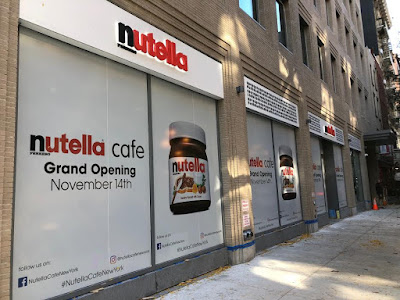 This is only the second Nutella Cafe in the ENTIRE WORLD (Chicago was the first). Menu items at the NYC location include pound cake panzanella with yogurt and berries, topped with — wait! — Nutella and toasted hazelnuts ($11). A grilled baguette comes topped with — ding ding! — Nutella ($7), and a brioche sandwich is filled with Nutella-flavored gelato ($9). (H/T Eater for that info.) If you want more menu details and pics, then check out this Bustle Nutella preview.

The cafe is in the retail space of the Adjmi Architects-designed seven-story condoplex where the starting prices for the homes are $6 million.

Report: Incoming condos for 13th Street and University Place will start at $6 million 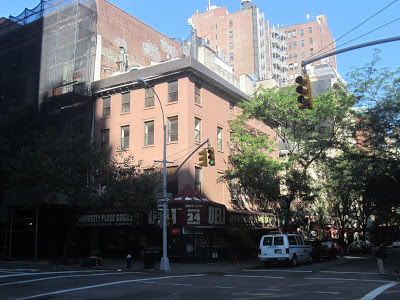 Kelloggs on Union Sq north, this joke bleeding south of the square can we look forward to a Fluff boutique in the former Republic space?

The Fluffernutter Cafe™️ was originally my idea, and I’m hoping they put it into the Coffee Shop location, right next door to a Just Lettuce! franchise location, so that we can finally have our healthy food and junk food cravings satisfied all at the same time.

I checked out this Nutella buildout last weekend (they were having a private event) and it looks spectacular. Apparently Nutella is like the second biggest company on the planet (at least in terms of global calorie consumption) so they spent some serious coin doing the buildout. I am one of the few people left who still don’t eat Nutella, but from the looks of that menu, that’s about to change.

Don't you mean the Nutella Cafe of my nightmares?

I have given up the fight. Now, whenever I hear anyone badmouth New York City, I don't protest. I capitulate. So Nutella Cafe, here I come. I don't even like Nutella that much. But this is life now. What can I do?

The ant overlords are winning.

This too shall pass.

The idiot-ification of University Place continues. But I guess anyone who'd pay those prices for a condo will have the $$ to patronize this place.

I happened to walk by at about 4:00 PM. There were 35 people standing in line waiting to get in...

It was so sad to open EV Grieve this morning to see the first three posts followed by this post on the Nutella Cafe. Three small businesses that have been part of the community closing because of landlord greed, while this corporate, trendy sugar shack is opening. Would the Wayside have survived if it had sold this Nutella based menu? Is it the food or the publicity or the upscale decor that attracts lines of consumers in the cold? Or the willingness of a corporation to invest in a loss leader for the purpose of spreading (no pun intended) their brand awareness?