Gaia Italian Cafe expected to reopen today after a short break; but for how long? 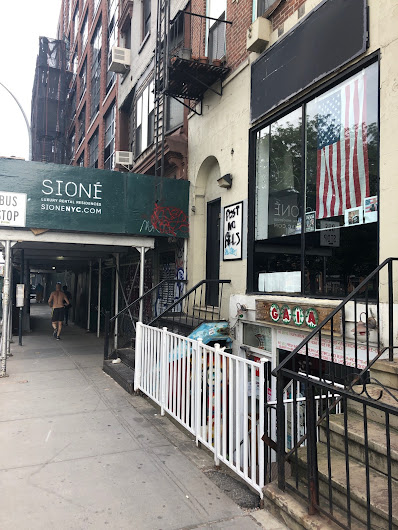 Local favorite Gaia Italian Cafe has been closed for a break since the end of service on July 28. They are expected to reopen today. (Gaia is closed on Mondays.)

Two EVG readers pointed us to the basement-level space here on Houston between Suffolk and Norfolk... 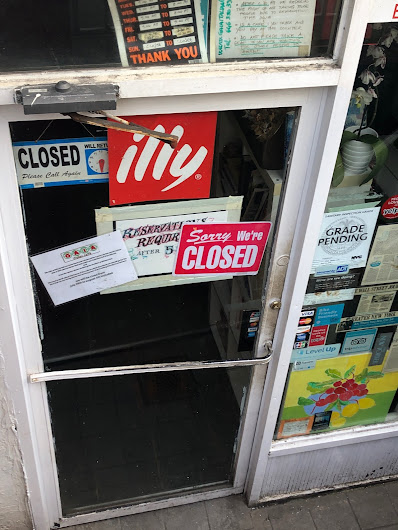 One reader, a longtime fan of Gaia's, found the note for patrons — presumably from proprietor Gaia Bagnasacco — especially worrying... 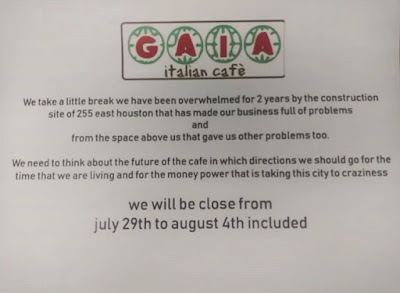 According to the note, they were taking a little break after being overwhelmed the past two years by the ongoing construction of Samy Mahfar's controversial 14-floor residential building — called Sioné — next door "that has made our business full of problems and from the space above us that gave us other problems too." (Not sure what exactly is in that upstairs space with the American flag in the window. Weeks back a reader mentioned MAGA signage inside the space.)

The Gaia note concludes with: "We need to think about the future of the cafe in which directions [we] should go for the time that we are living and for the money power that is taking this city to craziness."

This isn't the first time that the 8-year-old cafe discussed closing shop. In late 2013, Bagnasacco posted on Facebook that Gaia was "closing probably forever." Thankfully that didn't happen, as we need more affordable and quirky places like this in the neighborhood.

I ate here twice a few years ago. It was a "find" - quirky with an old New York feel and an owner who made it clear she did not tolerate fools. Given that it is a basement place, I thought with a low rent, she could make a successful go of it. A pity if it folds.

Excellent home style Italian food at reasonable prices. We will have fond memories of Grandma's spinach and ricotta gnocchi, mini-calzones, pizza when available, and the many pastas that we've had there. There are complaints about the owner on Tripadvisor and I'm sure Yelp, but to me she is a New York character, surly but not mean, and we never had an issue with the service. Mangia!

We love Gaia and her cafe with the fabulous, plentiful, and affordable food, and her rubber ducks and her attitude. Please don't give up, Gaia!