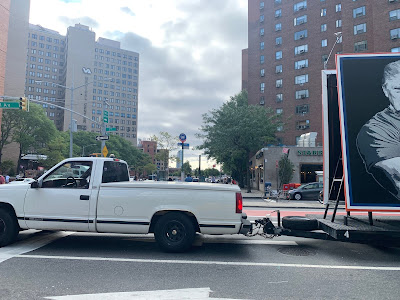 Perhaps you saw this traveling billboard today... Vinny & O spotted it at First Avenue and 14th Street ... and caught up to it on 23rd Street... 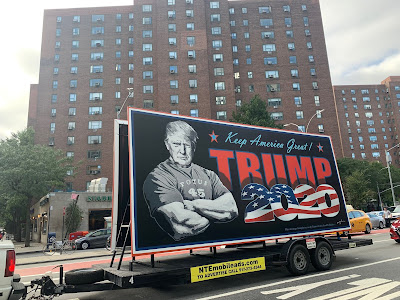 And the reaction? Per SILive:

“It’s been a hell of a ride so far actually … no violence,” LoBaido said. “One person threw a plate of food on [Trump], but I have a power washer and a mop just in case people throw eggs or whatever.”

LoBaido said he received the worst feedback from folks on the Lower East Side and students from New York University.

“I’m just expressing myself, art is to provoke emotion and I know how to do that,” he said.

A) This billboard doesn't exist, its a media hoax designed to distract you from the real issues.
B) Donald Trump is fake news being perpetrated on the public by the Deep State.
C) America has always been great, at least for some people.
D) This guy (like Scott Baio) is a crisis actor who has appeared on several episodes of Breaking Bad and 90 Day Fiancé.
E) According to QAnon, Jeffrey Epstein is hiding in the basement of a pizzeria in Staten Island waiting for the Pentagon to instruct him to release the pee tapes, translated into 11 different languages.
F) Everything in the universe is connected if you stare at it long enough. If you don’t believe me, just binge watch every episode of Homeland.

Talk about yearning for attention. Poor guy. This stunt reeks so hard of trolling, it's so clearly not about Trump but rather just a sad, ordinary, uninteresting guy who wants attention on himself but can't figure out any other way to get it. He can put the power washer away. Nobody is going to bother him much.