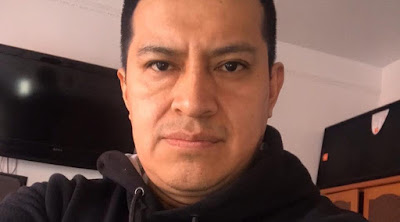 Sad news from Miss Lily's 7A on the corner of Seventh Street and Avenue A. Edgar Artur Cajamarca, who worked in the kitchen as a prep cook, died on March 24 due to complications from COVID-19. He was 46.

Here's more via an email from the Miss Lily's team (thank you to the readers who shared this):

We are very sad to announce the passing of our colleague and friend Edgar Artur Cajamarca...

Born in Ecuador on April 23, 1973, Edgar moved to New York in 2000. He joined Miss Lily’s in June 2016 as a delivery man at the Houston St. location before moving over to Miss Lily's 7A where he worked first as a dishwasher and then was promoted to prep chef.

A humble, hard working, much loved member of the kitchen crew, he was always a great team player. Edgar’s first love centered around his family. He was a devoted father and son. He was also an avid Barcelona FC fan and well known for his notable commitment to riding his bicycle to and from work to his home in Brooklyn, no matter what the weather.

Edgar is survived by his children Johanna, Paul and Christian, the children’s mother Maria, and his mother Maria Chunchi.

Edgar was working on building a house for his mother in Ecuador and if we could raise the $10k to fund its completion that would be incredible. Most of our team have already contributed and with only a few thousand dollars to go we are reaching out to our community to see if we can reach the goal. Every dollar donated would go directly to completing his mother's house ...

Please take care and be safe.

Miss Lily's 7A Cafe closed for service on March 15 for the duration of the health crisis.
Posted by Grieve at 8:10 AM

This is very sad, my condolences to his family and friends. This disease will touch almost everyone before it’s done. A 93 year old neighbor of mine is in the hospital with Coronavirus, and a lawyer who was a longtime family friend has already passed away. While reading the obituaries in the Sunday Times it is shocking to see how many people have been suddenly taken away by Coronavirus. Yet we still have people who don’t get it, and continue to jog en masse in the East River and congregate close together in the parks. My cousin panicked and insisted on taking her family to Florida to hide from the virus, now she is surrounded by it, yet she is still going out to the beach and shopping at yard sales.

Stay inside, and wear a mask when you go out. Wash your hands, and don’t spit over your shoulder while jogging or cough or sneeze in people’s faces, each of which has happened to me during the pandemic. It’s not that hard to stop this virus from spreading; the hard part is changing people’s bad habits and sense of entitlement or delusions of a immunity. Let not let more people like Edgar get infected and die in vain.just because we couldn’t change our daily routines for a few weeks.

@Giovanni - Hear, hear. Condolences on the loss of your friend, and sincere sympathies to the family of Mr. Cajamarca.

Only 46? So young with so much more time left. This is devastating. Condolences to his loved ones.

@Gojira Thanks, I just heard another neighbors brother who was only 38 has also died from complications from coronavirus. Unfortunately theIr family (like my fun loving/crazy cousin) traveled to Florida during spring break and may have spread it to him and to others. Now they are hiding out on Long Island where they think they are safe, and where a major outbreak is underway due to New Yorkers trying to escape from the city. And we also know a lady In a neighboring building who tested positive who still went and used the laundry room and now her neighbors are freaking out. The building is bringing in crews to disinfect, but does they ever really work? The only solution is to say away from people when you go outside, otherwise stay safe and stay inside

Very sad news. And just before his birthday.
As a fellow supporter, just tiny correction, it's FC Barcelona.