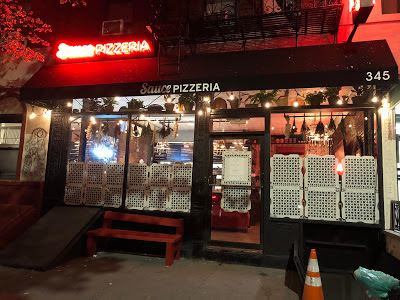 The crew at Sauce Pizzeria, 345 E. 12th St., has been making and delivering up to 400 pizzas at no charge for hospital workers on the front lines of the COVID-19 crisis.

Owner Adam Elzer said he got the idea after hearing from a nurse who said she and her fellow workers didn't have time to eat, as NBC New York reported.

When Elzer's landlord discovered that they've been delivering to 40 different hospitals in all five boroughs, he reportedly offered to help.

"I saw what Adam was doing on social media honestly and when we noticed what he was doing it was very clear that we needed to help him," said Ben Kraus of A&E Real Estate Management. The group also donated more than $20,000 to help Adam get more pizzas to more medical workers.

A few people asked when Sauce is open for takeout-delivery. The answer! 5-10 p.m. Fridays through Sundays. Whole pies only... 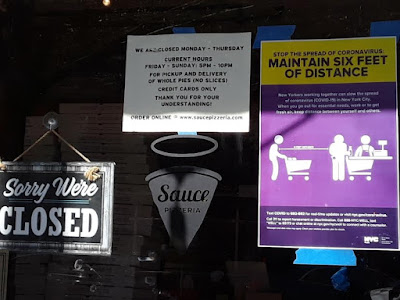 The pizzeria isn't the only local restaurant helping out. Frank Prisinzano, the owner of Supper, Frank and Lil' Frankies, and his team have been delivering meals to local hospitals.

Ho Foods, Kura and 886 teamed up to donate and provide meals for hospital workers. Their goal is 2,000 bentos by the end of this week.

Previously on EV Grieve:
San Loco's special delivery to 2 local hospitals
Posted by Grieve at 5:30 AM

It's nice to read about a landlord doing the right thing, for a change. There should be more people like this.

This is the EV spirit I love!

Wow. A sliver lining in the midst of an ongoing crisis. It's good to know there are more kind people in the world.

Wow, they're possibly the last decent landlord in NYC!

Kudos to Sauce AND to their landlord for doing good deeds in a very tough time!

Lovely, thanks for sharing.

some nice news for once!