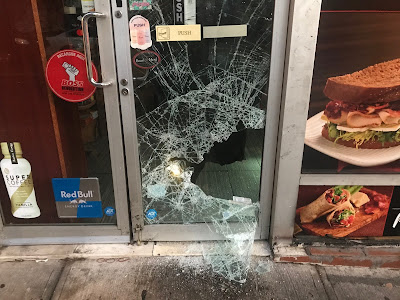 Two attempted break-ins occurred this past Tuesday night at East Village Finest Deli on the southwest corner of Avenue B and Fourth Street.

The first attempt occurred when a man took a hammer to the door at 12:23 a.m. Several hours later, a man with a skateboard, possibly seeing that there was already a smashed door, tried to finish the job and get in at 4:38 a.m.

Manager Anwar Shahbain told me that Mohammad, a neighbor in the building across the street, screamed through the window at the perpetrators, potentially scaring them off while another neighbor called the police. (The store also has an alarm.)

Anwar expressed gratitude to his neighbors as well as to Sgt. Omar Elsayed at the 9th Precinct, who responded to the burglary attempts and called the family multiple times to alert them to the attempted break-ins. 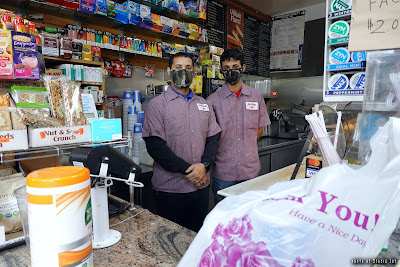 Anwar arrived at 5:09 a.m. and spotted Mohammad, who was still standing in the window across the street, arms crossed, keeping an eye on the business.

East Village Finest Deli will keep their COVID-19-adjusted hours of 6 a.m. to 10 p.m., but have boarded up the store with plywood for now. 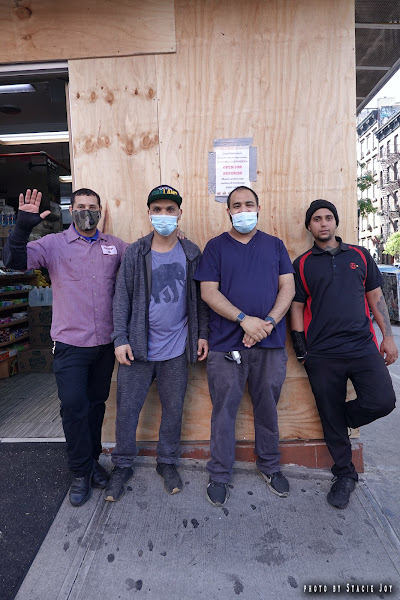 Love these guys! They've been here through all of this madness with me and never shut their doors or ran out of my favorite snacks. Thank you for caring about your neighbors and sticking it out through all the hard times recently. May you be here forever!