More about the damage at B&H Dairy 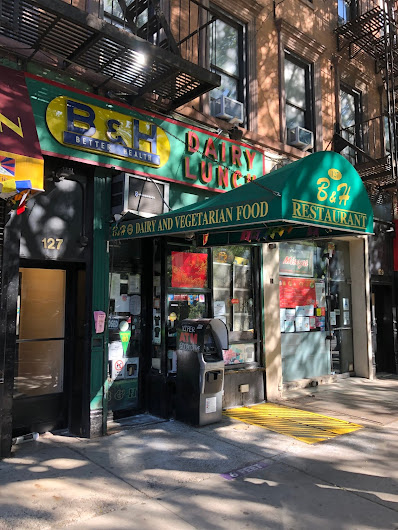 As first reported yesterday, B&H Dairy was one of the Second Avenue businesses damaged by so-called "agitators" on Saturday night... someone broke the 80-plus-year-old lunch counter's front window... 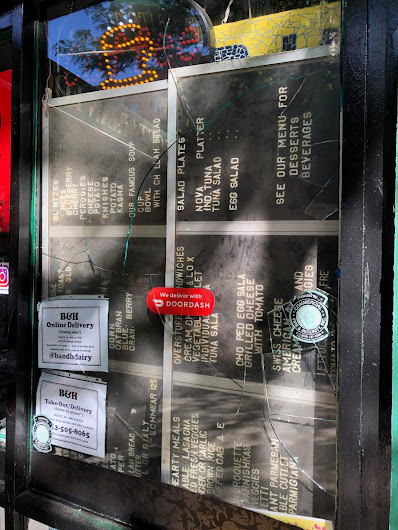 "I was in the restaurant. The protest came by and someone threw a big bottle in our window. They also broke the window at the bakery and set garbage on fire. I was scared. [Her husband and co-owner] Fawzy ran to the restaurant and stayed until it was not so crazy. Rafael and Hugo stayed until midnight. Mike and Leo are there and everything is OK, but we won’t get the new windows until [today], so Fawzy is spending the tonight in the restaurant."

B&H had been struggling to stay in business during the COVID-19 crisis. They reopened on May 16 for takeout and delivery. They also have an ongoing GoFundMe campaign.

Many of those are news helicopters.

I'm distraught about B&H. I've been eating there almost daily to try to support them. Let's save B&H again. How many bad hands do they need to endure?

@bill so sorry about the noise however the worst noise I heard last night was windows being smashed on my favorite local small businesses. Shops who are doing their best to stay afloat, feed their families during the pandemic. bill I guess you were the real victim last night.

I am really outraged for B&H and the other small businesses that have been vandalized. These are local businesses that are already having a tough time staying in business with the virus pandemic, and these idiot VANDALS just breeze in and break/steal with impunity.

NYC is NOT in any way on top of who these people are and where they come from.

Vandalizing and/or looting small locally-owned businesses is really fucked up. NO ONE from the Lower East Side would have done that to their own community.

I find it impossible to feel sorry for bank chains that displace local businesses just to have a branch presence every few blocks. Their willingness to pay five-figure rents each month causes us to lose community-based businesses -- when the banksters split, leaving empty storefronts, those businesses and others like them can never return.

The bottom line is that this is all a matter of CAUSE AND EFFECT. If good cops would IMMEDIATELY deal with bad kops, the public would not lose faith in the police. By covering for bad kops and/or letting them get away with abuses and even murder, good cops are adversely affected: their jobs become more difficult and even dangerous. There are plenty of good cops who know this.

If not for the rioting, I am positive that the kop in Minneapolis would not have been fired or arrested. It's unfortunate that that is what it takes to get a measure of justice in the US.

There is NO excuse for rioting.