Perspectives on feeding the homeless in the neighborhood 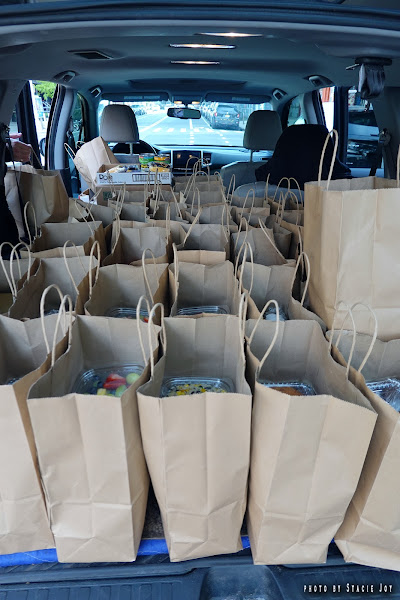 This spring, I had the opportunity to document an East Village-restaurateur family's efforts (here and here) to feed the neighborhood's homeless.

The married couple, who own a restaurant that's currently closed during the COVID-19 crisis, have made two deliveries to date of boxed meals that they've prepared — a number that has increased thanks to donations from EVG readers.

On a recent day in May, I met up with them again for what will be the third delivery. We’ve learned a bit from our previous two runs and we have music on hand to make the rhythm of the work flow easier. (I’m partial to The Cramps and the three of us find a lot of in-common musicians to keep us company.)

We soon establish a plan, and map out how we hope the day might go. We’ve done all the shopping and the couple has done some of the meal prep the day before. We have contact info from a local resident in need whom we’d hoped to meet up with on the prior trip, and a special request or two, including dog food, which we didn’t have last time as well as extra sanitary supplies.

The delivery goes well, and after days of shopping and planning and hours of prep, handing out all the meals and kits is over in less than 90 minutes. We manage to meet up with the friend of a reader who made a donation in his honor, got the dog food to the couple and their puppy, and spent only a bit over what we had allotted. 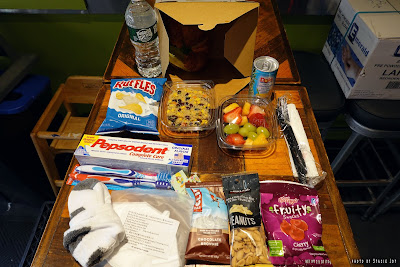 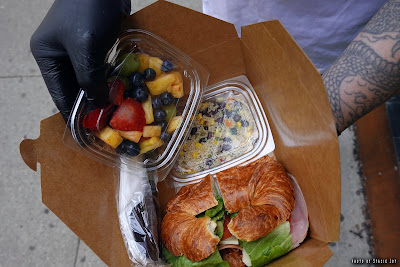 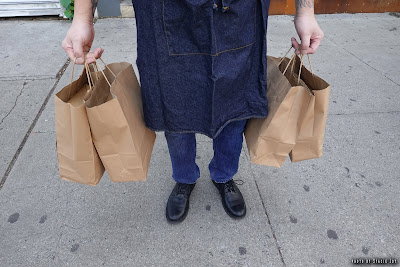 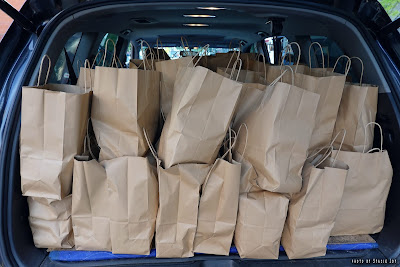 This time, when we’re out making deliveries, I ask if the husband can answer a few of my questions. I’m curious about how he feels about the project and if his thoughts vary from his partner’s.

How has this experience been for you?

We came up with the idea for this project at the very beginning of the statewide PAUSE order. There have always been homeless people in the East Village and Lower East Side, but there has been a level of support for them in people who they can panhandle from.

When the city shut down, that interaction disappeared, and the homeless and their plight became much more visible. As business owners, we tried to help individuals by giving them food from the restaurant, but then they started coming back looking for more, and that was difficult for our staff to navigate.

Whatever efforts the city or other organizations implemented wasn’t noticed by us, so we felt we had to come up with a plan to address the problem on our own.

Having grown up in the EV/LES area in the 1970s and 1980s, hanging out in Tompkins Square Park and on St. Mark’s Place, I have seen homeless people all my life. Throughout the years I have thought of ways to help but I always just end up giving someone the change in my pocket or my leftover dinner from the restaurant where I just ate.

As we live our busy lives, balancing work and raising a family, rushing from one place to the other, sometimes it’s easy to let the homeless blend into the background. If we don’t think about them, they can become fuzzy shadows existing only in our peripheral.

But when we carried out our project, we got a glimpse of who they are. We found people from many different countries, many different ages, many different races, and genders. Putting them in the forefront, we discovered they were all people, who, for whatever reason found themselves in a difficult situation living rough on the streets.

Overall, my experience has been mixed. I am shocked there are so many homeless out there — just in our neighborhood. I am heartbroken to see that some are so young. Most people are receptive, some are hostile, some won’t look at me, some talk to themselves, some are in withdrawal, some ask for drugs, some ask for money, one woman asked for underwear, one man was distressed because he needed to use a bathroom, some are panhandling, some are sitting on the sidewalk in a tent or a cardboard box.

At the end of each day, I am physically and emotionally drained. Sometimes it’s hard to deal with reality, but I guarantee that whatever I’m feeling pales in comparison to how these people live every day. And it always leaves me feeling like there is much more work to do.

The community response from the initial story was overwhelming, with lots of people reaching out to privately donate funds and/or goods for this project. How did that inform your decisions about what to buy, how to shop, what to serve, and how best to deliver food and goods to those in need?

I will be eternally grateful to the folks who had the faith to donate, without an idea of who we were, or what we would do with the money. That we included feminine hygiene products and socks seemed to resonate with your readers, so we expanded in that direction.

Due to the virus, we asked for masks, which we included in each package. We included toothpaste and a toothbrush. So many people asked for a second meal, for a friend or relative or themselves, so we rethought the menu and created packages that could easily be two or three meals and easy to eat. We put everything into one paper shopping bag for efficiency. We were able to really stretch each dollar we received.

Being in the restaurant business, we bought unprepared food in bulk as well as containers at a restaurant supply market, and the rest of the items we bought at Costco and a dollar store.

We filled a paper shopping bag with all of these items, at a cost of about 10 bucks per bag.

In personally delivering these grab-n-go bags to people, you received feedback from the recipients. Anything that you’d care to share?

I discovered that people are much less wary if I approach them wearing an apron. Otherwise, I’m just some random tattooed guy walking up, and people can be understandably defensive. But when we get through that initial wariness and the guard drops, most everyone is receptive, happy that someone would give them something without question.

What stays in your mind from this experience? What might you tell other people who may be interested in helping?

What has really stuck in my mind was the last stop. We found a large community of homeless, 20 or more, and were able to give bags to all of them — except one. We were packing up and closing the car door when a young man walked up and asked for a bag. But we had already given out the last one.

My heart dropped — we searched the car and were able to give him a fruit salad, which was meant for someone else, and the rest of the sandwich I was eating for dinner, but I could tell he was disappointed, looking at everyone else smiling, taking things out of their bags. I was devastated and felt I failed him as I couldn’t look him in his eye to tell him we had no more to give.

So, my takeaway is this: whatever it is that we are able do, there is much more work to do. What we did — two full days of shopping and preparing 72 bags, which filled our car — was handed out in one and a half hours. It was over so quickly! What we did was a drop in the ocean. There is a serious problem out there, which has been exacerbated by this pandemic, and I hope that any new relief package includes help for all these people in need. 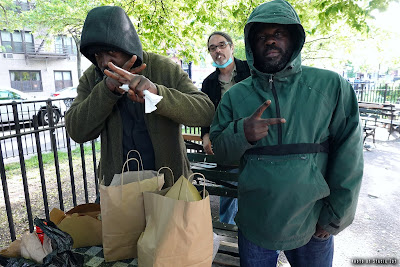 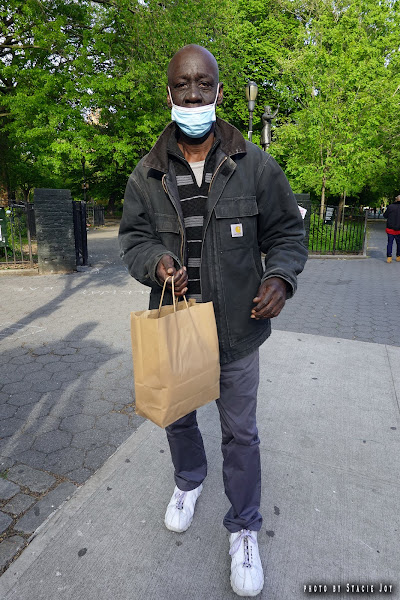 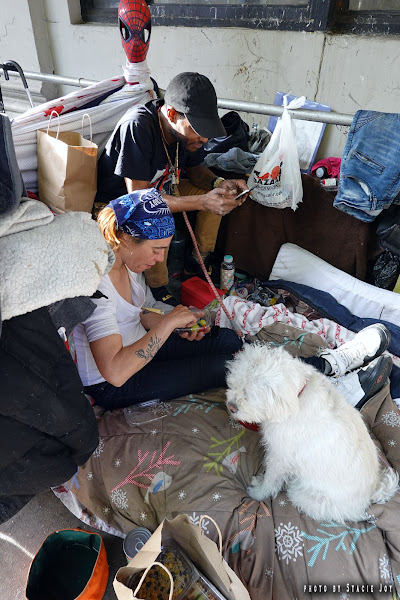 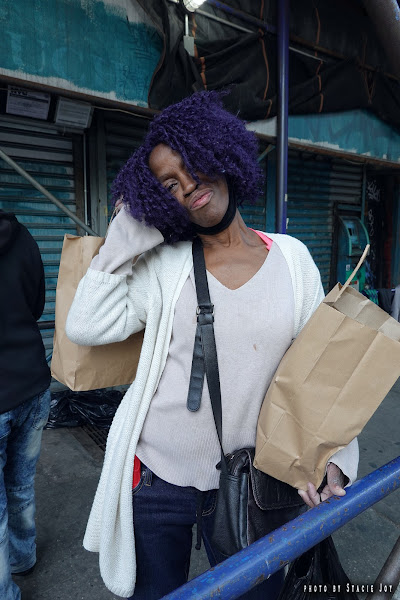 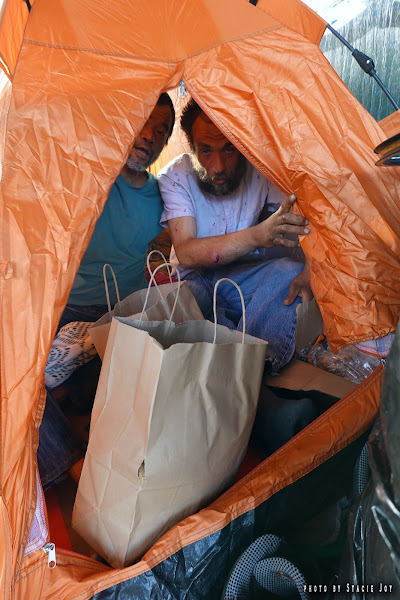 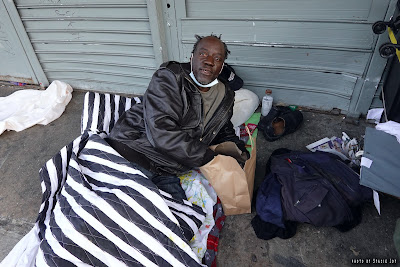 Previously on EV Grieve:
• Anonymous East Village restaurant owners continue to feed those in need of a meal

• Anonymous East Village restaurant owners distribute meals to neighbors in need
Posted by Grieve at 8:40 AM

EV love is like no other
STRAIGHT from the heart!

HI. We would love to donate bagels to this cause. Please contact us at tsbagels@gmail.com Thanks.

Wonderful! It's been heartening to see how neighbors look out for one another.