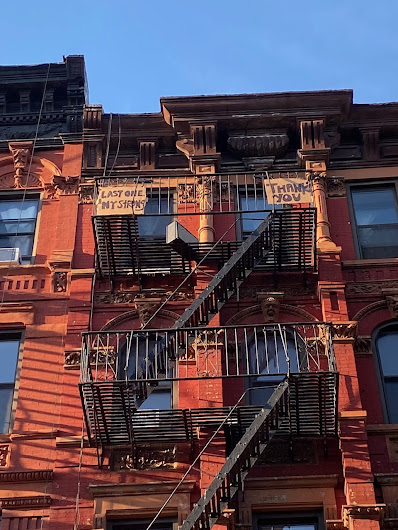 In case you were headed over to Seventh Street between Avenue A and First Avenue this evening to hear the Jimi Hendrix-style version of "the Star-Spangled Banner" ... last night marked the final performance.

Starting on April 3, Seventh Street resident John the Baptist (aka John Fredericks) played the anthem on his Bobkat with a Stratocaster neck from his fire escape during the 7 p.m. cheer for health-care workers.

The song became a tradition, even attracting two off-duty ER doctors from Albert Einstein College of Medicine in the Bronx who wanted to hear it live.

He recalled one night where he didn't break out his guitar, and "people were looking up at our fire escape, and they were, like pissed," he told Sarah Larson as part of The New Yorker's cover story on a day in the life in NYC during COVID-19.

The tribute was always personal, as his father and two brothers are ER doctors, per The New Yorker. It also received the approval of Janie Hendrix, Jimi's sister.

And an upclose version that Rainer Turim shot for Gothamist...

I've been thinking that the 7 PM show of gratitude had really started to dwindle, and was much less raucous and clangorous than it had been, this just confirms it.

Here along Avenue C its long gone. It had a good long run. Time for it to end too.

Bless him, a little cheer in our days, particularly back in the horrible early weeks of lockdown. It was rather jarring to hear in the days after labor day with the protests beginning...