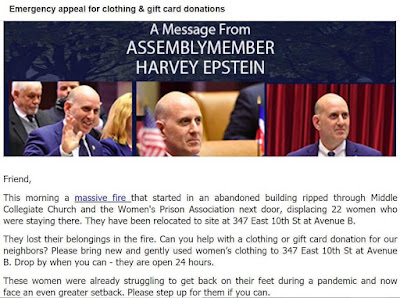 See update at the end of the post about clothing donations!
The early morning fire on Seventh Street and Second Avenue also displaced the residents of the Women's Prison Association at the landmarked Hopper House at 110 Second Ave.

An estimated 22 residents were forced to flee the building early this morning without any of their possessions. Local Assemblymember Harvey Epstein is spearheading donations for the residents, who are temporarily staying at 347 E. 10th St. at Avenue B. New or gently used women's clothing and toiletries will be appreciated — as well as gift cards (CVS and Target were cited).
Olga Rodriguez, who works for the advocacy organization dating here to 1845 devoted to women with criminal backgrounds, told CBS New York that the fire took over the shelter "in minutes."

"It was very scary, and the ladies were running in their slippers, in their bathrobes, in their pajamas. They were sleeping," she said, adding that she's not sure what will happen if the building is deemed unsafe. "These ladies have gone through a lot," she said. "They don't need to go through this, too."
Diana McHugh, director of communications for the association, told CBS News that everyone is OK, but women had to leave behind personal belongings, including phones and clothes.

The women, who were soaking wet from standing in the rain this morning after being evacuated, have been temporarily relocated to a nearby family shelter in Alphabet City.
Residents at the family shelter provided the women with food, blankets and dryers for their clothes. McHugh said, however, that the association is expecting high costs because of the fire.
"We'll be OK, but it will certainly have an impact on us, especially mid-pandemic. This has already been a very difficult time for our residents, just from a safety perspective and a mental health perspective."

We await news on the structural integrity and the extent of smoke damage to our beloved Hopper Home. pic.twitter.com/FUZX1iryau

We are also in awe of the neighbors who poured in with clothing. We thankfully and respectfully decline any more – as you can see, you have taken great care of us in this way! 🙏 pic.twitter.com/xKvzP3Hf7C

I just donated some clothes and coats to 347 East 10th. Everyone working there are lovely people. They said they really need socks, undergarments, and shoes. Hence the gift cards request. There are also children living at the facility so kids items are also very welcome. Hoping that Hopper House can be opened again soon for these women and families.

Have donated via their website. Any amount you contribute will help.
And if you can contribute a gift card to Target or CVS, that will be very welcome.

I can't even imagine how traumatizing this must have been for all the women who've been living at this residence next door to the church. To have to evacuate in the middle of the night, terrified, & stand out in the cold & rain, is almost unbearable to think about. God bless these ladies.

Thank you so much. We are so proud of and grateful for our East Village community. Your immediate and generous response today is keeping us strong!

This is devastating. Where do we drop off donations? Is there a place at the site? Is there anything standing? Or should we bring clothing, etc. somewhere else? Thanks!

Grieve, I've read that they have more clothing donations than they can handle now, but still ask for gift cards so the women can get any hygiene products they need.

WPA - I made a donation to your organization, we are with you. Love, a congregant from your next door neighbor Middle Church