Gov. Cuomo to allow the return of indoor dining – at 25 percent — on Friday 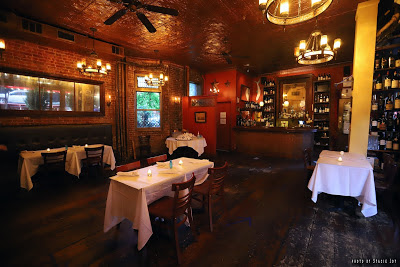 After a two-month shutdown, Gov. Cuomo today stated that NYC restaurants can reopen for indoor dining (at 25-percent capacity) starting on Friday... two days earlier than his previous announcement of Feb. 14.
Per NBC 4:

In New York City, new case and rolling hospitalization averages are both down by double-digit percentage points over the last seven days compared with the weekly average for the prior four weeks. Deaths are down, too, though by a lesser degree.
"We respond to the data, we respond to the facts that we face today. The facts may change tomorrow and then we will change with the facts," Cuomo said Monday. "The enemy changes tactics, we adjust with the enemy. But the numbers are down now."
Statewide, data shows daily positivity rates have declined for a full month, while the number of people hospitalized (7,716) is the lowest total since Dec. 28. The state's rolling seven-day positivity rate is the lowest since Dec. 2 (4.42 percent).

Cuomo originally ended indoor dining in the city after two-plus months ahead of an expected holiday-related spike in COVID-19 positivity rates. As Eater and other outlets have noted, the state's own data reported that 1.4 percent of COVID-19 cases came from restaurants and bars compared to nearly 74 percent for private indoor gatherings during the fall.
Meanwhile, according to published reports, 74 NYC restaurants have filed a motion to reopen at 50-percent capacity.
Photo from this past fall of Lavagna by Stacie Joy
Posted by Grieve at 3:00 PM

How nice of King Cuomo to allow indoor dining to reopen in NYC. Is there anybody left to reopen?

"King Cuomo" did not cause the pandemic but is doing his job and following the advice of medical experts and keeping a close eye on statistical info. Social gatherings especially closed dining and parties are the biggest spreaders of the virus. I hate what has happened to our to so many restaurants but I order deliver or pickup to help them out the best I can, dining is something it might take another for to feel comfortable with.

This should be at 50 percent - let's move forward everyone

There are many studies that conflict with the one that reported a low risk from indoor dining: https://www.forbes.com/sites/suzannerowankelleher/2020/12/15/this-is-how-quickly-covid-19-can-spread-in-a-restaurant-per-new-study/?sh=6e2f1d771fe4

The most agreed upon advice from the experts is not to enter an indoor public space without a mask on. It's shocking to me that so many people will risk the lives of their loved ones just to go eat in public. Staying home sucks but it's doable.

RE: Neolan " following the advice of medical experts"
No, he is not. "9 top N.Y. health officials have quit as Gov. Cuomo scorns expertise."
https://www.healthleadersmedia.com/covid-19/9-top-ny-health-officials-have-quit-gov-cuomo-scorns-expertise

This fucking guy. Even after the New York AG’s report released at the end of last month, Cuomo still can’t bring himself to take any degree of responsibility for the nursing home disaster at the start of all of this. But granting restaurants to open two days earlier, he’ll want a medal for.

@6:23pm wrote "It's shocking to me that so many people will risk the lives of their loved ones just to go eat in public. Staying home sucks but it's doable."

Thank you for saying that, b/c it's exactly how I feel. It will be a long time before I'm willing to sit indoors at a restaurant for a meal. That's just reality now & for many months to come.

And all the people who are not willing to get vaccinated are just going to prolong the whole thing for EVERYONE. My only option is tor protect myself as best I can - from the virus, and from reckless other people.

RE: Screaming Enterainment "it's shocking to me that so many people will risk the lives of their loved ones just to go eat in public"
Science shows that locking up everybody is not warranted since covid is not much of a threat to younger people. Every study shows that if you are 55 or older, or have underlying health issues you should isolate.

"In the 16 countries examined, persons age 65 years or older had strikingly higher COVID-19 mortality rates compared to younger individuals, and men had a higher risk of COVID-19 death than women."
https://bmcpublichealth.biomedcentral.com/articles/10.1186/s12889-020-09826-8

So, that young person who's free to roam won't die, but they'll pass it on to the 55+ person who can't isolate b/c of their job or whatnot. That's just great.

It’s definitely King Cuomo. It’s random, capricious nonsense. Closing hospitality with it was connected to 1.4% of cases, by the state’s own stats, is not “following the science.”

And yes, if you’re in a vulnerable population, stay home until you get vaccinated.

And what about the servers who don’t feel safe waiting on people indoors? They have no say.

actually February 8, 2021 at 5:44 PM he used transnational corporate McKinsey's hyperfear numbers of piles of bodies in the streets...nothing to see here, move along.

Outdoor dining isn't also 100% safe let alone indoors with enclosed dining. This past fall in 2020, I got a call from a restaurant in Upstate NY to tell me to quarantine as they were doing contract tracing. 2 of the customers whom I was near in an outdoor dining environment tested positive for the Covid-19 virus. One of them came down with symptoms and other didn't. I was told they were a couple and could have caught it from another restaurant patron sitting nearby as people were eating and chit chatting without their masks.

The EGV comments: to hold its own with asshole New Yorkers.

Probably fuck this up.