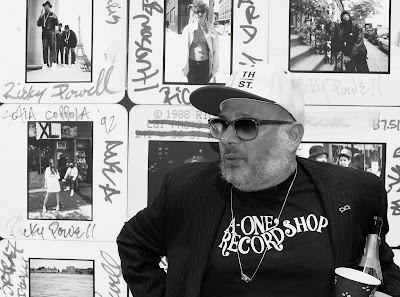 Ricky Powell, the celebrated downtown photographer best known for his work with the Beastie Boys and other iconic figures in the early days of rap, has died. He was 59. Media outlets have reported that he died of heart failure.
From Pitchfork:

In his heyday in the in the late ‘80s and early ‘90s, Powell was a mainstay in the downtown Manhattan art and music scene. His portraits and candids of musicians like Eric B and Rakim, LL Cool J, Run-DMC, and Madonna, as well as downtown NYC denizens like Keith Haring, Andy Warhol, Jean-Michel Basquiat, Sofia Coppola, and Laurence Fishburne, have been shown in art galleries and published in several photo books.

In 1986, he quit his day job (selling lemon ices) to go on tour with the Beasties Boys as they opened for Run-DMC.
He would become a regular with the band, from cameos in videos and lyrics, such as in "Car Thief" on Paul's Boutique.
Powell later hosted the cable access show "Rappin’ With The Rickster," which chronicled the oddities of daily NYC life as well as up-and-coming actors, musicians and scenesters.
You can read more about his life and the outpouring of tributes to him at these sites:
• Complex
•  Brooklyn Vegan
• Rolling Stone
And here's a January 2020 interview with him on OG Talk at the Organic Grill on First Avenue...
Image via Wikipedia
Posted by Grieve at 9:00 AM

"Homeboy throw in the towel, your girld got dicked by Rickey Powell".

That whole girl got dicked thing is pretty gross and doesn’t fly today. So disrespectful to women.

Ricky was my friend and a sweet man. RIP to a true downtown NYC legend.

There is a short doc called Ricky’s Museum on Vimeo that’s worth watching. It was shot eight or nine years ago. It’s kind is sad because you see it wasn’t easy living the freelance life he lived. He says how he doesn’t feel great at one point. He didn’t get rich like the Beastie Boys did. He didn’t even have a fridge in the basement room he lived in and had to eat all his meals out. That probably contributed to his declining health over the years. But you can see how he enjoyed reliving the memories through all the memorabilia he held onto. It meant a lot to him and represented an exciting time in his life. I love that he stayed in Greenwich Village and kept that vibe going. It is too bad he didn’t have more time.