Thanks to Mighty Quinn's, Otto's Tacos is making a (virtual) return 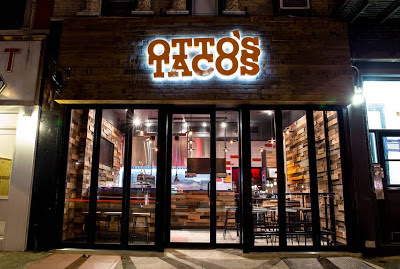 All four outposts of Otto's Tacos permanently closed late last year, including the one on Second Avenue between St. Mark's Place and Ninth Street.
However, the quick-serve tacqueria has made a comeback thanks to Mighty Quinn's Barbeque.
In an article this week on ghost kitchens and delivery-only restaurants, CNBC reports that Otto's has become a virtual brand, an increasingly popular concept thanks to COVID-19.
After their closure, Otto's founder Otto Cedeno reportedly contacted Mighty Quinn's.
Per CNBC:

The two companies opened their flagship locations in the East Village neighborhood two blocks away from each other less than a decade ago, and their founders were friendly, swapping industry updates and tips, particularly as the coronavirus pandemic hammered New York City.

But rather buying Otto's Tacos outright, Mighty Quinn's struck a deal instead to license the brand and bring it back to life as a virtual brand. The barbeque chain also sells chicken wings under the virtual brand Sugar Wing.

"We decided, rather than bringing on additional kitchen capacity, to utilize what we already had at Mighty Quinn's to execute their menus," said Mighty Quinn's co-founder Micha Magid.

For now, the digital, delivery only location for Otto's is on the Upper East Side (as of last month). Otto's will be expanding to other neighborhoods in 2021. Service will likely one day include the East Village, given that both Otto's and Mighty Quinn's started in the neighborhood ... and because Otto's has a built-in audience here.
The former Otto's storefront on Second Avenue is said to become another taco shop.
Posted by Grieve at 5:00 AM

This is great news! The kitchen at Mighty Quinn's is organized, and they purchase good quality meat. This is actually the best thing that could have happened for Otto's. I can't wait to have some good tacos!

OMG, yay! I loved Otto’s and was sad when it didn’t reopen. I hope they come down to the E. Vill soon.

In order to save some money, the new taco place will simply rearrange the letters on the old sign and call itself Toto’s Tacos.