Department of Buildings: 202 Avenue A does not have a 'valid certificate of occupancy' 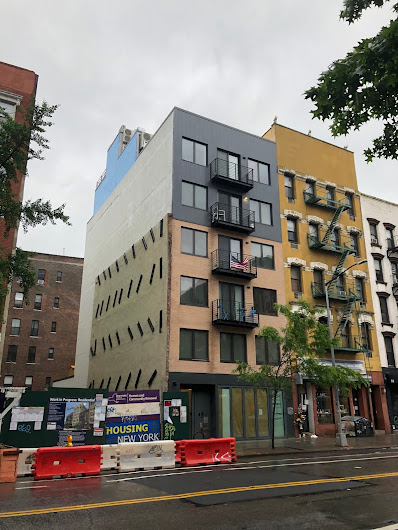 Early Friday morning, a 26-year-old woman from the Bronx died after falling from a fire escape on a building on 28th Street near Second Avenue.
According to published reports, Tyler Thorpe was heading to the roof of the 5-story building to hang out with friends around 1 a.m.
Media outlets were quick to note that this was the second fatal fall from a Manhattan building in less than a week.
On May 22, Cameron Perrelli reportedly slipped and fell while climbing up from 202 Avenue A to the roof next door at 200 Avenue A.
"These accidents will not stop till something is done," her father, Louis Perrelli, told the Daily News on Saturday. "It is so heartbreaking for my family, and now another has to endure this tragedy."
In one development involving 202 Avenue A, the Department of Buildings inspected the address on May 26 regarding a "report of recreational use of the rooftop, contrary to the C of O."

The inspector found the following, per public records:

OBSERVED ROOF CONVERTED TO RECREATION SPACE PER DRAWING #A-106.01 ON ALT 1 APPLICATION #121188231 (PERMIT VALID THRU 10/17/2021) WITH SEATING FOR APPROX. 20 PERSONS, TABLES, BARBECUE AND SINK. BUILDING IS FULLY OCCUPIED WITH TENANTS OBSERVED ON MULTIPLE FLOORS. BUILDING ALTERED UNDER ALT 1 APPLICATION AND OCCUPIED WITHOUT A VALID CERTIFICATE OF OCCUPANCY.

The DOB subsequently issued a Class 1 Environmental Control Board (OATH) violation.
There are three classes of OATH violations:
Class 1 (Immediately Hazardous)
Class 2 (Major)
Class 3 (Lesser)
According to public documents, the DOB imposed a $2,500 fine and scheduled a hearing for July 15.
The DOB states that Immediately Hazardous violations must be quickly rectified. If an acceptable Certificate of Correction is not received, then additional civil penalties may apply.
Highpoint Property Group owns 202 Avenue A, which goes by The Topanga, having purchased the building in late 2017 for $6.75 million. Workers later added a horizontal and vertical enlargement to the existing 4-floor structure, doubling the total square footage from 5,334 to 10,920.
The penthouses, which include outdoor spaces, rent for $12,000 a month, listings at Streeteasy reveal. According to 311 records, there have been nearly 75 noise complaints at the address going back to December, when occupancy began at the renovated building.
Media outlets reported that Perrelli, 24, who worked as a project manager for a global research firm, was attending a birthday party at 202 Avenue A when she fell into an airshaft around 3 a.m.
Perrelli's death, coupled with reports of other disruptive rooftop parties in the neighborhood, prompted local elected officials to introduce new legislation to demand accountability from property owners.
"This tragedy shows just how dangerous overcrowded or mismanaged rooftop parties have become and how often they have little to no safety protections or monitoring," local City Councilmember Carlina Rivera said following Perrelli's death.
Rivera is working on two bills to address this issue. She has already introduced Intro 1292, which would require tenants to sign and acknowledge their understanding of the city's noise codes. She's planning on introducing a second bill that would ensure enforcement agencies have easier access to phone numbers of overnight building supers or contacts and require better oversight of rooftop use and capacity.
Posted by Grieve at 5:25 AM

Email ThisBlogThis!Share to TwitterShare to FacebookShare to Pinterest
Labels: 202 Avenue A, rooftop parties

Carlina will introduce a toothless bill which won't save lives nor will it address the quality of life issue which these carpet bagger landlords have created. Fines which these companies consider "chump change" will be added to property owners expenses and become tax right offs. Shut down these parties permanently, save the lives of young people and let us all sleep soundly.

Thank for the update EV! Wonder if High Point's party buildings at 436 and 442 E 13th have C of O for their roof decks?

If it's one thing we can expect, it's nothing.
In this town, money talks and BS walks.

Unless there are massive fines and jail time for landlords....nothing will change no matter how much complaining and hand wringing is done.

Politicians are just capitalizing on headlines in this election cycle and will ignore all this once they have lost interest.

Always look at the DOB info. How I proved my landlord illegally deregulated my place. This is gonna be a huge lawsuit and the greedy developers deserve it... the girl did not

$12k a month in rent for a penthouse in NYC? A yearly amount could be down payment for a nice home.

Heads up to the tenants of 202 avenue A. Until the landlord resolves the C of O situation, legally you do not have to pay rent. A different scenario occurred at 331 east 9th where slumlord Jared Kushner illegally built a penthouse on the roof without having a proper C of O. There is a show on Netflix about this. The show is called Dirty Money. The episode is called Slumlord Millionaire. The tenants in that building haven't paid rent in the last couple of years and a judge ruled that even if / when Jared gets this rectified, the tenants legally do not have to pay the back rent.