Photo from 2020 by Stacie Joy
Dee Pop, the longtime drummer for the seminal downtown band Bush Tetras, passed away on Oct. 9. According to an announcement by the band, he died in his sleep. He was 65.
Cynthia Sley and Pat Place, who started the acclaimed no-wave-post-punk band with Pop in 1979, released this statement:

Dee Pop was a quintessential New Yorker, growing up in Forest Hills, Queens and living in New York ever since. He was not only Bush Tetras drummer, but also our archivist, owning an original copy of every Bush Tetras release and t-shirt and also maintaining the band's masters.
In addition to Bush Tetras, Dee Pop played with Richard Lloyd, Michael Karoli (Can), The Gun Club, Jayne County, and The Shams, William Parker, Eddie Gale, Roy Campbell, Freedomland, Hanuman Sextet, Radio I-Ching and 1000 Yard Stare. He will be sorely missed by his bandmates and the many people he touched throughout his life.

Bush Tetras had a box-set release party previously scheduled for Saturday night at Howl! Happening on First Street. The band decided to move forward with the event, stating in a Facebook post: "We think he would have wanted us to carry on ... with our Bush Tetra release event. The band meant everything to him."

The evening became a memorial and celebration of his life and attracted many fans and longtime friends. 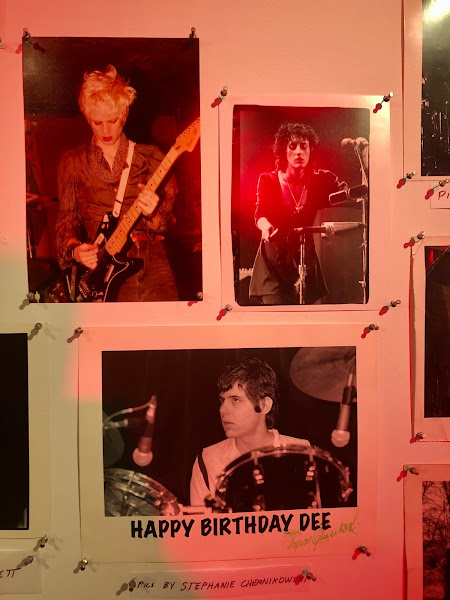 There were plenty of tributes to Pop on social media. Among them:

Bob Bert, who has played drums with Pussy Galore, Sonic Youth and Lydia Lunch, among others, wrote this on Instagram: "Completely DEVASTATED over the passing of Dee Pop ... a good friend [and] an amazing drummer who was a big influence to me! Extremely sad day!"

From singer-songwriter Amy Rigby: "Very sad to learn of the sudden passing of brilliant drummer Dee Pop. What a genuinely sweet person, the best of NYC. My heart goes out to his family and friends & Cynthia and Pat/his band Bush Tetras."

And via writer Howard Phillips Rodman: "Saddened to hear that Dee Pop, drummer for the extraordinary Bush Tetras, died ... The BTs innovative, propulsive work represents the very best of post-punk/no wave, and Dee Pop's drumming was its driving force, its heartbeat."
Pop was born Dimitri Papadopoulos in 1956. As Pitchfork noted, he "grew up idolizing Buddy Rich, Gene Krupa, Ringo Starr, Charlie Watts, and Keith Moon, but it was Tommy Ramone who would inspire him to start playing despite a lack of formal training."
Pop is survived by his son Charlie and daughter Nicole.
Posted by Grieve at 5:30 AM

Dee really worked to build a deeper music scene here in the East Village putting together musical series at the old CBs Lounge and other spaces. The bands supported him but the audience just wasn't there for challenging free music. A great loss for the East Village.

Well said nygrump! Aside from being an amazing musician, he was a great curator and fan of music. In the mid-2000s he organized a nice series of shows in the back room at the much missed Jimmy’s 43. That’s where I first heard his great (and underrated) combo Radio-I-Ching. When I was a buyer at Mondo Kim’s, Dee was a regular and was always hipping me to new music. Knowing that I will never run into him in the neighborhood again is a tough pill to swallow.

Saw the reformed Bush Tetras something like 2 years ago out at El Cortez and they played like a young band with inspiration. So rare for a reunited group but indicative of their spirit. Sad news but glad to hear they found some solace in the event.

Andy. Thanks fof mentioning that Dee hosted a weekly freestyle jazz jam for a couple years in the backroom at Jimmys no 43, 7th st. He loved the free jazz , loved the freedom it gave him as a drummer. RIP.