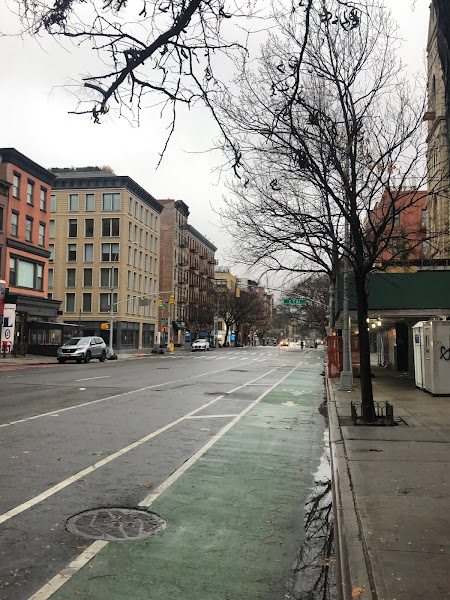 An item from the past week that we didn't get to mention... the construction fencing and temporary sidewalk structure have been removed from Second Avenue between Seventh Street and Sixth Street.
Workers have also wrapped up the weather-proofing at the remains of the fire-damaged Middle Collegiate Church at 112 Second Ave. ... The church marked the first anniversary of the fire on Dec. 5. 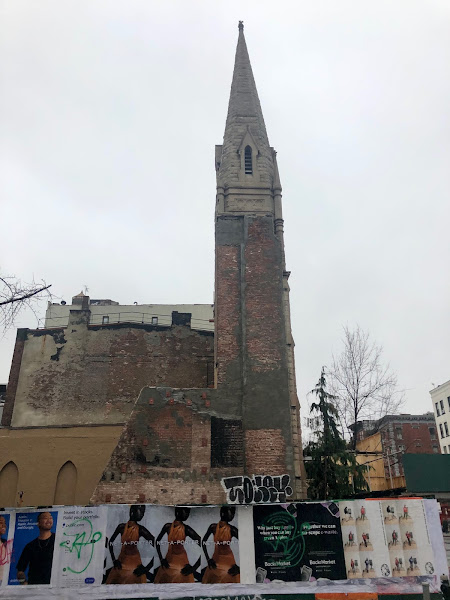 The fire spared the steeple and its historic contents — the New York Liberty Bell, which dates to the early 1700s. The bell is for now housed at the New York Historical Society.
The FDNY previously said that faulty wiring at 48 E. Seventh St. was to blame for the fire. An FDNY spokesperson told 1010 WINS that the fire had been deemed "non-suspicious." No. 48 was demolished. (More background here.)
Middle Collegiate Church currently holds services at the Calvary Episcopal Church at 21st Street and Park Avenue South. You can read about their plans to rebuild the sanctuary right here.
Previously on EV Grieve:
• At fire-damaged Middle Collegiate Church, it's moving day for the historic New York Liberty Bell
Posted by Grieve at 10:30 AM

They keep saying "faulty wiring". My memory is that the building had already an interior fire, then had been unattended (boarded up) for a while, and then finally actual renovations were begun. I'm under the impression that when you are rehabing a building in NYC, the law codes require you to hire a LICENSED electrician. That is to ENSURE that the new (and old) electrical is NOT faulty. So who was the electrical company doing the wiring? Who was the contractor for the renovation & who did they hire to do the electrical? Was it someone who knew their stuff or was it Bob's Cheap & Fast LLC? The building wasn't wiring itself, someone was working in it. Who?

@2:43- Generally speaking one doesn't need a permit or a licensed electrician unless there is an upgrade or major change to existing service. "Faulty wiring" is quite possibly something you can't see as it may be hidden inside the wall. People often comment on how charming these old buildings are but in truth they are loaded with lead paint, asbestos, formaldehyde, termites, outdated plumbing, and faulty wiring.