Back in April, I made note of the ginormous Chipotle banner hanging from the building on the northeast corner of First Avenue and St. Mark's Place... 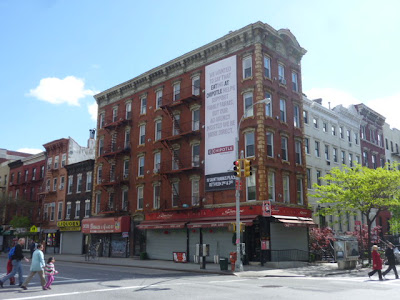 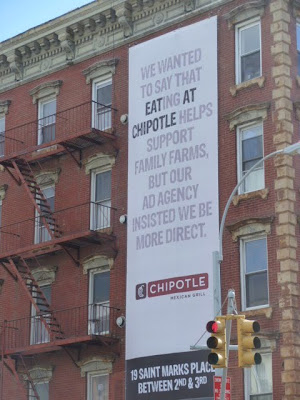 The Chipotle banner is one of several different ads in the East Village and West Village that the Greenwich Village Society for Historic Preservation (GVSHP) say is illegal. In a recent letter to Robert LiMandri, commissioner, New York City Department of Buildings, GVSHP Executive Director Andrew Berman noted that the Chipotle sign is illegal because "the property has no signage permits in-process or issued in the last year." The area was inspected and violations issued, but no hearing has been set.

The GVSHP was instrumental in getting that awful Kobe Bryant video game ad removed on Avenue A and 12th Street this spring... I hope the Chipotle ad makes a quick exit too... I hate having such a large fast-food banner on a main thoroughfare of the neighborhood...
Posted by Grieve at 6:57 AM

that banner reminds me of this keynote: http://www.thersa.org/events/vision/vision-videos/slavoj-zizek-first-as-tragedy,-then-as-farce

can you please post the letter and/or link that berman sent?

Paquitos can't be too amused about it either.

I'm not sure if the letter is online anywhere. Perhaps you could get a copy from gvshp@gvshp.org

So I was living in that building when they put up the banner. Actually, I was lying in my underwear in bed when the guys putting it up drilled it into the wall directly outside my window (the one next to the bottom left hand corner of the banner).

I took it as one more sign that the East Village has become one big Starbucks-- a pantheon of ads and corporate chains. Solution?: I moved to Brooklyn.