Eloise's owner: "I never will tie her up while I run errands again"

Here's the final chapter of Eloise's story.... She is now home safe.... From Eloise's owner:

A dog walker named Beth saw her with a homeless guy sleeping in a park. She recognized Eloise from the poster that I posted at the Tompkins Square Dog Run. She waited for him to wake up before she asked him if he had recently found her. He was very friendly and excited to help Eloise find her owner. She called Home Again (Eloise has a microchip) and gave them her number, which was on the poster. Since he didn't have a phone, he let her take Eloise, albeit sadly and reluctantly. In the meantime, Home Again called me and gave me her number. I was already at Rivington and Orchard after following the lead from the e-mail you forwarded me, and she was at Rivington and Norfolk. So I walked toward her, and she was waiting for me with Eloise in front of Café Luise. I also got to meet the guy who had initially taken her ... He was very worried about her and told me he fed her a ham, tomato, and bread sandwich. He ... couldn't have been more concerned about finding me. She has been sleeping since we got home a couple hours ago.

Eloise and I moved to the East Village only a month ago. After she was taken, I regretted tying her up, and I never will tie her up while I run errands again. However, it seems like all parties involved were more than willing to help me find her. I feel very lucky to live in a community with so many cooperative and altruistic people. 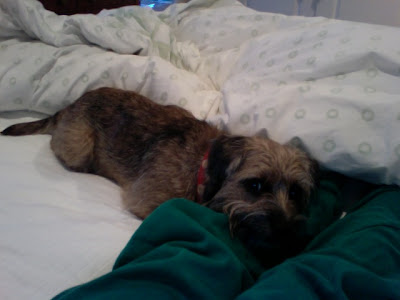 This is great news! I am happy for Eloise. I hope other dog owners realize that it is rare to have a happy ending like this. Please don't leave your dogs outside. Not even for a second.

I'm happy that Eloise was reunited with her owner. However, there's something disconcerting and ironic about the little dog getting to go home while the homeless guy gets to go back to the park bench.

What a relief!!
Thanks so much to EV Grieve and their readers for helping Eloise find her way back home.
Most dogs stuck in this same situation aren't so lucky.
I can totally relate to the homeless guy tho. He felt unwanted, and he saw a dog that looked unwanted too. I would have done the same thing if I was in his shoes. He just wanted a companion. If he was a bad person he would have made money from that dog, by selling it to laboratories, dog fighters etc. But he didn't, he did the right thing. My heart goes out to him.

Thank you for posting this; sadly, most people don't believe anyone will take their dog until—someone does.

You should never, ever feed ham to a dog; it has too much salt and can damage the kidneys—especially of a little dog that will be more sensitive to large quantities.

And unfortunately, those microchips are a mixed blessing: http://www.noble-leon.com/

i hope she gave that homeless guy a reward

awww makes me wonder whatever happened to the pomeranian Sammy :'(

I wouldn't give the homeless guy a reward. If she really only ran in the store for a second, it sounds like he grabbed the dog and took off pretty fast. I am sure he gave it up to Beth the dogwalker because Beth was persistent, and he knew she'd come back with the cops if he didn't.