Recession not over until Vanessa's says it is

The big news yesterday... those party animals at The National Bureau of Economic Research said that the recession ended in June 2009.

It's not over. You know why? Because the "recession special" sign is still up at Vanessa's Dumplings on 14th Street near Third Avenue.... 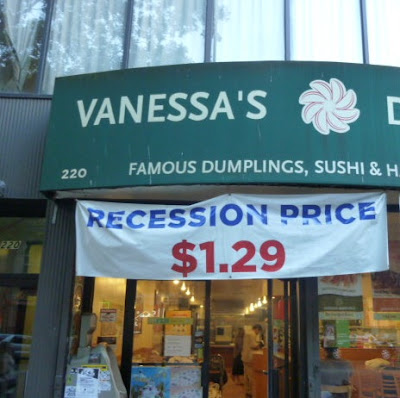 The Vanessa's sign has been up since the fall of 2008... when it comes down, then we'll know the recession is really over.

I suggest that the fine folks at The National Bureau of Economic Research start eating some dumplings in the meantime.
Posted by Grieve at 6:48 AM

Ohh I love love love Vanessa's veggie dumplins' but its veggie sammiches are amazing. And less than 2 bucks! So good!

It's funny because the usual price is only 70 cents more... but I won't complain with extended recession at Vanessa's!

The recession will be over when I can afford dumplings.