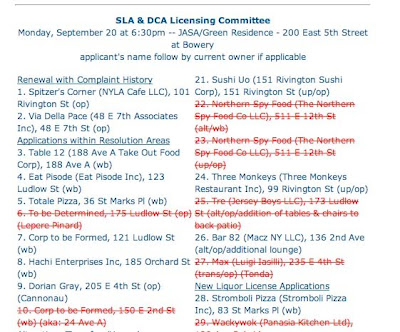 For me, one of the most interesting items on the CB3/SLA docket was:

As you recall, Frank Prisinzano, who owns EV Italian empire Frank, Lil' Frankie's and Supper, came before the CB3/SLA committee on June 14 with his plans to turn the former grocery at 24 Avenue A and Second Street into what he described as fast-food Italian. The board never approved the application.

Anyway, the future of this corner inspired some spirited debate hereabouts. (78 comments or so.) Read some of that here.

So is someone else looking to take over the former Graceland space (and not a bank or 7-Eleven then!)? Plus, 24 Avenue A was Graceland's address; 150 Second St. is the address of Nicky's and the former barber shop next door. More mystery!

I asked district manager Susan Stetzer about this "corp to be formed." She said that she wasn't sure on this one — she didn't pursue because the application was withdrawn.

Anyway, it appears the real-estate listing for this space is still active.
Posted by Grieve at 11:58 AM

I figured this would get pulled. When you first posted the docket a few weeks ago I went to see if there was paperwork posted on the building but couldn't find anything. They'll probably pull the Superdive strategy of submitting/withdrawing (aka the pullout method) every month until someone actually wants that space. In the meantime I'll wallow in my nostalgia over Graceland.

Anyone planning on speaking against via della pace at cb3? If I could be there I would. Charming restaurant until 11:30, and then the thumping eurotechno comes on until the whee hours. A manager once told me he "couldn't believe people go to sleep at 1 am" when I asked him to turn the music down.
I don't even know how they have an active liquor license: none is listed on the SLA online database for that address, and "via della pace" isn't incorporated in New york (no listing in the DoS business database), I can't even find a business license for that address (48 east 7th street, 10003).

They do have an active liquor license. Expires 10/31/2010. I just looked them up on the SLA website. Name of the corporation is "48 E SEVENTH STREET ASSOCIATES INC."

I'll be speaking out against Table 12 - a coffee shop with a liquor license? I heard they gave their original license to "Destination" (thanks a lot) and now they want ANOTHER ONE?

Nobody stood up against that place at tonight's meeting even though they had the lucky #2 spot on the agenda. I wish I could have heard more about what the conversation was, but it was very hard to hear what with all my chatting.

Something about a clown in the basement, which turned out to be an illegal cabaret. Not sure. The discussion went on for a long time, and even at the end I'm not sure what agreement they came to. I think they will approve him if he agrees to not have a clown bar.