Knife and Fork, fish and chips... under one roof 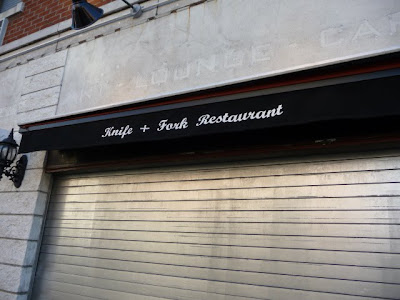 Eater reports that the chef from Knife + Fork, the East Fourth Street eatery that closed closed in June, will revive his old restaurant in the upcoming Percy's Tavern on Avenue A at 13th St. As Eater reports, Percy's will be in the bar section, serving pub fare like fish 'n' chips. And beer. This is at the former Al Diwan space.

The Knife + Fork chef is Damien Brassel. Back in June, Percy owner Larry Watson, an East Village resident, brought his chef with him to the CB3/SLA meeting. He said that he aspires to be like Northern Spy around the corner on 12th Street. And he mysteriously wouldn't name the Michelin-starred restaurant where he currently works out of fear of losing that job. (Watson said everyone will be suitably impressed when they hear where he worked.)

But I don't think the chef with Watson that night was Brassel....
Posted by Grieve at 12:30 PM