Bob Arihood shared this report ... as well as the photos... Around 3:30 yesterday afternoon, a resident in an apartment on Seventh Street noticed a man on the fire escape at 126 St Mark's Place building across the backyard. The man broke the window of an upper floor apartment and entered. The Seventh Street resident called the police. 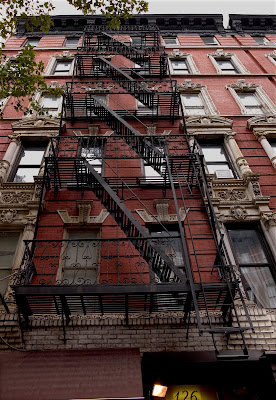 Several NYPD units, including the 9th Precinct commander Deputy Inspector Lehr, arrived on Seventh Street, St Mark's Place and in Tompkins Square Park in response to the call. Officers went to the apartment that had been broken into and also up to the roof above the apartment.

Bob said that the officer, far left in glasses, did not appear to be seriously injured beyond some scrapes, cuts and perhaps some bruises, though he was taken to a hospital in an ambulance. 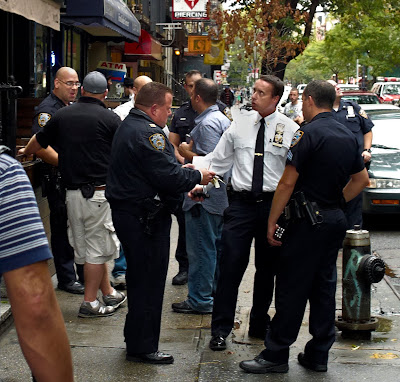 The man who broke into the apartment was gone before the police arrived on the scene.
Posted by Grieve at 6:40 AM

I think we need to watch out for more incidents like this. That shooting the other day on 6th St involved people climbing around on the back sides of the building.

Keep your windows shut when you're not home, install security gates, keep roof doors locked and pay attention - know your neighbors. Windows on the back of a building or an air shaft are not immune to criminals.

I've heard there the number of break-ins is up... and there have been several along here on 7th/St. Mark's...

What kind of East Village idiot doesn't have a gate on their fire escape window, especially in the back? That was the first thing I did in my apartment, even before I moved in...glad the cop is okay, though.