As the bagel rolls 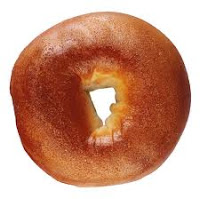 As we first reported back in July, Christopher Pugliese planned to open Tompkins Square Bagels at 165 Avenue A... Then! Plans were changed, and he was expected, instead, to open a few storefronts to the north at 171 Avenue A..

Pugliese, who owns the three Bagel World shops in Brooklyn, told me yesterday that he has gone back to 165 Avenue A — and he has signed the lease. A late fall opening is still expected.

He also has encouraging words for small-business owners. "It's a tenants market right now. Don't be afraid to negotiate and be tough about it. If you have a good biz and can pay your rent on time, it actually means something right now," he told me. "That and the fact that — seriously — I would not even be in the game if not for the people at CB3 and the folks (especially Avenue A residents) who put the kibosh on bar after bar after bar."

Previously on EV Grieve:
Coming this fall to Avenue A: Tompkins Square Bagels
Posted by Grieve at 7:00 AM

Wow what an asshole! I'll have you know that tenants of 165/167 have been threatened by management with the bagel shop.

According to tenants on the block they were told that it was going to be a HUGE BAGEL SHOP AND THAT IT WILL BE OPEN 24 HOURS A DAY AND HAVE BACKYARD TABLES AND CHAIRS. Management said: Wait you'll see it's going to be really crowded loud and annoying ha ha!

165/167 Avenue A are owned by Westbrook Associates who are sleazy, predatory real estate developers who bought 17 buildings in the East Village. They have succeeded in pushing most rent stabilized tenants out with threats. Diablo Royale's two year construction at 167 was so violating that long time tenants moved out one by one. Interestingly the owner of Diablo Royale, Jason Hennings also keeps an office at another Westbrook building at 504-508 East 12th Street. Residents of this building say that he actually uses all of the storefront spaces in that building for storage and who knows what?!

These buildings also happen to be managed by Magnum Management which is run by the notorious developer Ben Shaoul who also owns the A Building.

According to a resident who spoke with the Bagel Guy. He said that Magnum Management would pay for most of the build out. This is terrible! We've been duped. It's going to be a scene.

This is a disgrace! The way to get back at this Westbrook and Magnum for all the 17 buildings is to not support any new businesses that want to make a go of it at these addresses.

The business owner should be contacted in early stages and they have been in this case. Don't tell me this guy doesn't know who he's dealing with. Anybody else speak with The Bagel Guy?

Ever see those storefronts on 12th. They've been closed since Ciao For Now and Jubbs Longevity left.

Well - to tell you the truth -there are just too many people in the East Village now.
The hotels and all the new high rise buildings. I wonder how many people have recently moved here. NO NO FOOD would be better than food at 165 Avenue A or elsewhere. We all conform to the idea that something has to go in our store fronts.


The Bagel Guy should back off and the people should do everything in their power to deter businesses at these 17 buildings. Just let the store fronts remain vacant and let the landlord rot.

That block is clogged up enough and well, you see its a political situation and things need to change. Our people are being threatened. No joke!

Does Rosie Mendez know about this? It seems like an awful lot of buildings. Can't anyone do anything? The peple over in Stuy-town did.

Woah! Lets slow down for a second here. A) Magnum guys have ZERO to do with my biz save for the fact that I have to pay my rent to them. B) I am NOT , NO WAY, EVER, going to stay open 24 hours. I'm 40 years old with a wife and (hopefully) kids on the way. 24 hours ain't going to happen. C) All 40 of said years have been spent on the streets on NYC. I understand, and have respect for the fact that people LIVE HERE. My Nana and Papa, Mom and Dad, me, we all grew up in busy parts of town. I'm not going to let anything happen in my shops that I wouldn't want to happen if they were living upstairs. THE STORE WILL NOT BE LOUD OR NOISY. But don't take my word for it, go and check out my other shops in Brooklyn and see for yourself. We are small time , hard working, decent guys. WE DON'T and never will sell cigarettes, whatever those things are called that kids roll joints with, beer, win, or lottery tickets. PLEASE, before you go and make all kinds of bad feelings and accusations, get your facts in order. Now, as far as my landlord, he's just a guy I pay rent to and nothing else. If you used my name or my biz, to threaten any one of you, then I'd like to know about it and put a stop to it. Please though, lets try to give peace a chance.

Also, I implore you to go out to our other shops and ask the neighbors, school workers, firehouses, community centers, and park workers what kind of place I run and the kind of help/work I have done for them and their communities. Then judge me . But do not PRE-JUDGE me . Thank you .

This doesn't have anything to do with pre judgement. It has to do with the fact that nobody should support Westbrook Associates, Magnum or anything that Ben Shaoul is involved in. I don't understand why anybody would want to. What's not to get.

I think a bagel shop sounds awesome! forget all the chatter and slander, give me an everything with cream cheese, Please!

This doesn't have anything to do with pre judgement. It has to do with the fact that nobody should support Westbrook Associates, Magnum or anything that Ben Shaoul is involved in. I don't understand why anybody would want to. What's not to get.


Then I guess nobody should come over and visit anyone who lives in 165/167 or, tenants there shouldn't pay rent because that would be supporting him. I'm just a tenant like the rest of you . AGAIN< BEN SHAOUL IS MY LANDLORD AND HAS NOTHING TO DO WITH MY BIZ PERIOD . What's not to get there?

Further, I think I have a little bit more experience with NYC landlords than you do and believe me when I tell you NONE OF THEM ARE SAINTS. If people supported (or didn't support) a biz based on who the landlord was, there would be zero biz's open in NYC. Trust me on that one.

Very valid and reasonable writeup, bagelman! I like you! Don't listen to the hater. It sucks that there are shitty landlords which is why it's great when un-shitty people move in and keep our spirit.

c'mon people... will NOTHING make you happy? it's NOT a bar! it's NOT a hookah! it's NOT another fuking deli! seriously. bagels are old-school nyc and i'm happy to have em. give me a whole wheat everything with a schmear, bagel dude. stay strong.

Guys, you're crazy if you think tiny retail shops within the EV will sink an owner like Westbrook. This portfolio is an afterthought. Relax. Bagels for all!

Being a longtime resident who lives around the corner, I'm excited to see an established and responsible business owner come into our neighborhood. Can't we be a little more gracious? I say let's give this guy a chance. It's better than another CVS or Starbucks, folks. Besides, since David's closed on First, there really isn't a decent bagel place in the area—unless you count that one near Beth Israel—but they charged my like $8 for a couple slices of French toast one Sunday. It was tasty, but seriously overpriced. I won't go there again. Just think: Fall is upon us...wouldn't you all welcome a fresh, hot, toasted everything bagel smeared with onion and chive cream cheese and a hot cup of Joe? I'm so there.

Can't wait to have good bagels back in the East Village! Best of luck opening up the shop.

I love this man and his bagels. The Park Slope store is great. I can't wait for the new store. You're damn right it's going to be a scene. I'm going to be getting down on some breakfast sandwiches!

Can't wait to have good bagels in this part of the East Village! It's a practical service that residents need, and I for one plan to be there many Sunday mornings! And to the poster advocating empty storefronts and less residents, I am just confused. Empty storefronts signal declining population, and more importantly, declining economic health - why would you wish that upon your city? Take a look at Detroit, or any of the many other cities experiencing declining population and economic depression, and hopefully it will give a little bit of perspective on the value of a vibrant retail and service economy. Obviously bad comes with the good, but I'll take a block of bagel shops, bodegas and restaurants over boarded up windows any time.

If tenants have a legitimate complaint against the landlord, they should get a lawyer and do things the legal way. Trying to intimidate this guy is not the way to go (he's a good guy but even if he weren't, bad strategy). These comments make me suspicious of your motives. I also think that comments like "there are too many people in the East Village" are so weird. This is NYC-- not some suburban town or little college town pretending to be a city. But then again, I'm a native NYer.

I AM THE BAGEL MAN. THANK YOU GUYS.

Just spoke to someone at the Park Slope location:

"Yes, it's still a go, though likely not until the Spring. The landlord is moving very slowly."