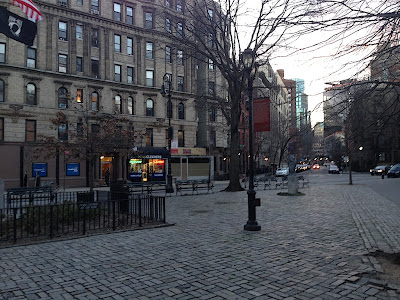 As we first noted back on Dec. 31, the the second NYC location for Third Rail Coffee is taking over the former Stogo space on East 10th Street just west of Second Avenue. (Thanks to Bill the libertarian anarchist for that tip.)

Co-owner/barista Humberto Ricardo shared more about the space with us via Facebook.

"I'm really excited to get back to the East Village. It was the first place I lived on my own in New York City when I moved there," he said. In particular, he always liked this picturesque stretch of East 10th Street — near the St. Mark's Church-in-the-Bowery and the circa 1860s row houses designed by James Renwick Jr.

He was friendly with Angelo Fontana, the proprietor of the beloved A. Fontana Shoe Repair. He loved the shop, and the location. He figured it would be the perfect location for his business when the time came. (This was before the Sullivan Street location of Third Rail.)

"I started talking to [Angelo] about it in case he ever did retire. Also because he was a nice man and I have a deep respect for craftsmen who do one thing well forever," he said. "When he was forced out and into an early retirement, however, I backed away from the whole thing — too much bad karma. And I'd be damned if I was gonna be that guy.

A huge rent hike caused the shoe repair to close for good after 45 years in business in February 2008. Stogo, the vegan ice cream shop, opened in December 2008. They closed at the end of November.

"So I watched as Stogo took it and well — I'll leave the story there," he said. "I know some people still have some sore feelings about Angelo's being run out of that space. I hope that once people get a sense of who we are and what we're about ... they'll be happy about [the new coffee shop]."

He said he expects the new Third Rail to be open in the next few month.
Posted by Grieve at 6:20 AM

Humberto that would be dope if you had a photo of Angela or the shoe shop with a little caption, somewhere in your new spot.

Good luck to you, Humberto! You've got a beautiful location there.