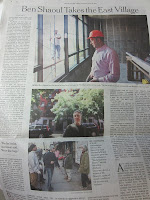 Word began spreading yesterday that controversial landlord Ben Shaoul was selling an unknown number of his East Village properties, estimated to be some 40 buildings in total. (The rumor prompted a discussion on Facebook as well.)

One tipster said that the sale was a done deal. Another source said that some behind-the-scenes employees in Shaoul's empire have openly been telling residents about the sale. No official word on the buyer just yet.

Shaoul's current East Village projects include the addition of the much-maligned 7-Eleven at 170 Avenue A as well as the residential conversion of the former Cabrini Center on East Fifth Street. It is not believed that these two properties are/were part of the deal. Ditto for his pool-topped A Building on East 13th Street.

Back in May, Shaoul, president of Magnum Real Estate Group, put his buildings at the recently renovated 118-122 E. Fourth St. on the market for $25 million. According to public records, 118 East 4th LLC bought the properties in November 2010 for $11.5 million. (The price is now down to $23.5 million.)

Here's a passage from a lengthy feature on Shaoul from The New York Times last July (the article includes quotes from EV Grieve):

In March of that year, he bought out members of an artists’ squat on St. Marks Place in order to turn the building into rental apartments. A neighborhood photographer snapped Mr. Shaoul, accompanied by sledgehammer- and crowbar-wielding construction workers, as he confronted some of the squatters. At some point the police were called in; the photographs soon circulated around the neighborhood.

The episode led the real estate blog Curbed to dub Mr. Shaoul “Sledgehammer Shaoul” and — although he was not actually holding a sledgehammer in any of the photos — the name and image have stuck. His reputation was reinforced as he renovated more buildings: rent-stabilized tenants in his buildings reported threats of eviction, and he racked up Department of Housing Preservation and Development complaints and violations for the interruption of heat and hot water, blocked fire escapes, broken locks and other issues related to construction and maintenance.

Shaoul's expanding portfolio reportedly includes properties in TriBeCa, the West Village, Harlem, the Financial District and on the Lower East Side and Upper East Side.

Much more as details become available.

He finally linked to your blog, saw the bottom picture, "The East Village Is Dead" and said, "I’m outta here!”

Whether Shaoul stays or goes doesn’t matter. The damage has been done. Apartments have been illegally deregulated and building regulations have been ignored. New tenants don’t care; it’s too much trouble to call for their rent history. The DOB doesn’t care; it doesn’t matter if the public thinks that they’re inept, their wheels are still getting greased.
I don’t hate the flu virus if I get sick; I hate the idiot who sneezed on me in the F train. Shaoul is just the virus that Bloomberg’s NY sneezed out.
Button up your overcoat NY, Christine Quinn season is coming!

Any person that can, in good conscious throw out elderly grandmothers and grandfathers from their home to make some quick cash, is not a human being, and not worth talking about.

I hope he did sell all his buildings, just so his foul stench can no longer be smelled around the neighborhood.

Does this explain why they refuse to give me electricity in 25% of my electrical outlets? The good news is every time these buildings change hands we get repairs done by the new owners. The bad news is we lose half our neighbors each time.

Also--good use of flu analogies

Anonymous at 5:29 PM is exactly right, but it's only half the story. Left out are the other key enablers of crimes against NYC tenants: the governor and state legislature, but let's stick to the governor for now.

Cuomo promised a revitalized DHCR with real regulatory teeth during the fiscal year 2011-12 budget negotiations but that agency still looks like the friend-to-landlords it's been since Pataki had his way with it...Time for NYC to get home rule back, baby.

Hey Jill, Everytime we get new owners and they make improvements they bill it back to the tenants.

So does this mean buyouts are finally coming?

Given the amount of money involved in NY real estate, and global real estate for that matter, it makes no difference who owns the land (which is more important than the building that sits on it). Demonizing an individual, or a particular company, allows existing social relations to remain unexamined, and unchallenged.

Sorry, shmnyc, but I don't get the point you're trying to make. I honestly don't understand it at all. Mind elaborating a bit?

Anonymous 2:17, My point is that if you remove Ben Shaoul (or 7-11) from the equation, nothing will change. Gentrification is a global phenomenon. It's fueled by a surfeit of money-capital, that is itself the result of the over-accumulation of capital. Abolishing capitalist relations of production is the only thing that will bring about the change that people here are looking for.

I wonder if the company Magnum name was inspired by the ammunition, the big bottle of champagne, or the large sized prophylactic. But look bro it's a no-lose situation, all those things are pure class bro. Am I right? Bro.

Anonymous 3:59, I'm for anything that works. However, stronger rent regulation is no guarantee. If a building has too many rent-protected tenants, banks will stop lending to the owners to make necessary repairs. Banks are one of the prime agents of gentrification. They can red-line a neighborhood and destroy it in very little time. And they remain unseen, so people direct their wrath against the landlord, or their neighbors who pay higher rent. Affordable housing construction is a good idea too, but who's going to build it, and where? Social relations determine everything.

Thanks, shmnyc, I understand the theory behind your point and am basically in agreement with it. What would be interesting though is to have someone in the position Ben is in and have his money but also have a heart. Capitalism would look so much different. - Anonymous 2:17

Mr Chittle, I truly enjoy reading most of your comments on this blog because I normally think you're spot on. But in this instance, I think the devil you know may be better than the one you don't. I'm terrified to find out who Shaoul may be selling to. I hate to say this, but until we know who is buying these buildings, Shaoul may be the lesser of two evils. Who knows?

May this b@stard rot in hell for all he has done to destroy the east village.
I hope that all those poor elderly people that he THREW OUT ONTO THE STREET FOR GODSSAKE will haunt his soul for the rest of his miserable life.
I am also very curious (doubtfdul/pessimistic) who the buyer is.

that NY times piece on Shaoul was ridiculously kind, he is way worse than that, He has threatened children, told them he would have their parents sent to prison, threatened seniors verbally but worst of all the endless stream of false cases that the court lets him bring with no penalty when they turn out to be unfounded. Special place in hell feels very empty that would be too good for him. And people who pay him $4000 and $5000 a month rent for access to a roof that should be free for everyone, they are just as bad.

Rumours abound that Shaoul closed today on at least one building (mine). Don't know the status of the rest of it, who is the buyer, how many buildings etc. Any information out there?