A tipster let us know that workers had removed the scaffolding and construction netting from the former Cabrini Center on Avenue B and East Fifth Street yesterday afternoon ... 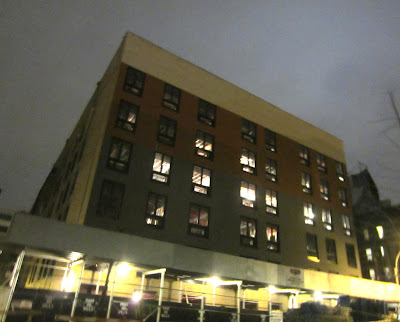 ... currently being converted into apartments... not sure what the final color scheme will be. But for now... 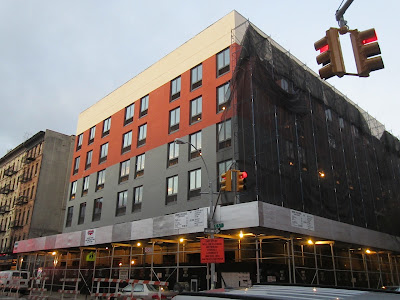 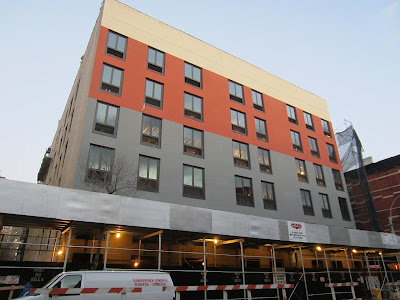 There are currently two retail spaces available here... as well as some bad karma, as some neighbors put it.

Previously on EV Grieve:
Cabrini Center patients out by the end of today; closes for good June 30
Posted by Grieve at 7:05 AM


CALLING ON ALL STUDENTS!!!!

PLEASE DO NOT RENT HERE

TAKE A POSITION AND BOYCOTT THIS BUILDING

CALLING ON STUDENT ACTIVISTS TO ORGANIZE AND DO SOMETHING NOW


CALLING OUT TO ALL RADICAL STUDENTS OVER AT THE WAGNER SCHOOL, SCHOOL OF EDUCATION, TSOA OR ANY OF THE OTHER PROGRAMS OR SCHOOLS

NOW IS YOUR CHANCE TO MAKE A REAL CHANGE

YOU CAN DO IT!

I'm curious about what these apartments. Any idea what the rent will be like?

Yeah, I don't get what's up with the paint scheme. At first I thought it was just a test palette. But then I saw it was on both sides of the building.

They should name that building The Neapolitan in honor of the ice cream.

@ Anon 10:42. They will likely be the same as all the other shitty buildings Shaoul develops in the neighborhood and cater to students, thus the first comment. Most Shaoul apartments are built with the cheapest materials. If you want a sense of what they are like. Go to yelp and type in Magnum Managment - here are a few samples:
Beyond awful. My daughter rented in their building at 49 1/2 First Ave last year. There was a roof leak from the start that took 5 months to fix but only because the superintendent felt bad about how long it was taking. They are skimming security deposits and challenging us to take them to small claims court. Their claim was $350 for 'excess paint' to prep the apt for the next tenant. This is a 350 sq ft apt. It barely takes 2 gallons to white wash it. We left it in perfect condition (swept, mopped, scrubbed). They refused to do a walk-thru at the end knowing it would prevent them from any 'flexibility' with our deposit. Absolute scum.
I sincerely hope that everyone who works at Magnum Management company gets a terminal illness. No, that is not overly harsh.

I had posted a review a year ago when I moved into 165 Avenue A, regarding their refusal to let me move in a day early into the empty apartment, and thus cost me about $700 in storage + hiring movers for the second time. They do not answer their phones and their email address is inactive.

They charge this entire building market rate rent, although it is legally filed as a rent-controlled building. They flagrantly get away with breaking the law, and I hope that anyone with the means to do so sues them for their due compensation.

The buzzer was broken for two months, and nobody came to fix it.

All of their repairs, the actual "management," is done through a shadow company called "PVE Associates." Most recently, the building switched to a stupid electronic key system, and made only two (impossible to copy) keys for our FOUR BEDROOM apartment. When I called to inform them of this, I did not even receive an apology for this retarded mistake. I was told that I need to fill out a form that they never sent in order to receive two new keys. We're moving out in 9 days, so to wait for them to mail it (it's a Friday) and then mail it back and then wait would mean that by the time we received the additional keys, we'd have moved out.

She offered to fax the forms, but we don't have a fax machine - I asked if she could email them and she said she doesn't have access to email. I asked where they were located and offered to come in personally to fill out the necessary forms - they said there WASN'T A PHYSICAL LOCATION. I said, "But you're sitting at a desk in front of a computer right now. You're somewhere. You have a physical piece of paper, because if you're going to fax something you need an original. Where are you located?" She repeated flatly that there was no location, rushed me off the phone and hung up.

Never, ever rent from them. Ever.

What I want to know is if they got the smell of feces and rice out of the building? I had a friend in Cabrini a year or two ago and the smell sucker punched you in the face walking through the front door.

Once the nausea wore off I had a REALLY good burger at the bar next door. Highly recommend. Old school NY hole in the wall type of place.

When I put on a few extra pounds I decided my days of horizontal stripes were over. Someone be kind and tell this building vertical bands would be much more flattering.

It makes me angry if i look at it too long... It's obnoxious.

My grandmother died here mysteriously while staying only for rehab on her hip. This place is no bueno.

I hope they feel great knowing that elderly people were pushed out so these RE fuckers could make more money- That post about the Mgmt company makes me so mad- this is another way Bloomberg and his buddies in the RE empire fuck us all over. Don't drink a large soda-they will somehow have enough staff to enforce that shit, but Landlords who lie, cheat and flagrantly break the law don't have anyone checking on them or suing them into compliance. What a surprise.

BOYCOTT THIS AND ALL SHAOUL BUILDINGS!
The scum of the village.
Disgustng.