What color would you like to see the MTA adopt for their flashing lights on Select buses? 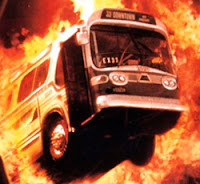 Last Tuesday, we had that post about the MTA discontinuing the flashing blue lights on the M15 Select buses on First and Second Avenues... apparently there were complaints because people thought the bus was an emergency vehicle.

We had a discussion about it in the comments.

Well, EVG regular Spike, who told us about all this in the first place, received an email from the MTA with some clarification:

New York State Vehicle and Traffic Law restricts the use of flashing blue lights to emergency-response vehicles only.

Per Spike: "Sounds better then 'stupid people couldn't tell the difference between a bus and an ambulance.'"

And now the MTA is testing new colors for the Select buses.

Spike is pulling for abalone shell or mother of pearl. And we're going with caput mortuum — Latin for "worthless remains," which captures how we feel riding the bus at times.

What color would you like to see the MTA adopt for their flashing lights on Select buses?

Black would be nice.

A spinning hypnosis wheel would be cool! Especially if they added eerie music also (for the blind passengers, of course).

But the lights DON'T "flash". They simply alternate "on" for a period, and then "off" for a period. These idiots seriously don't know the standard definition of the word "flash"?

... maybe we can get little disco balls up there?

I'm OK with the color as long as it's free-range and artisanal.

Clearly, the DOT should immediately hire us all.

Until they start stopping at St Marks Place/9th Street, I don't give a fuck about these buses.