Checking in on the Treehouse, where you can find free live music every Sunday night above 2A 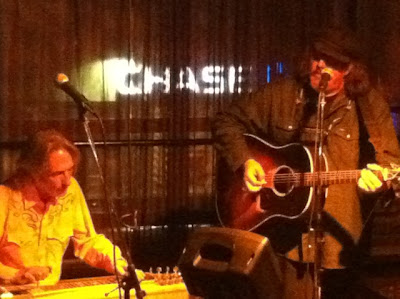 [Lenny Kaye and Kevn Kinney at The Treehouse]

On Sunday night, The Treehouse, the live music venue upstairs at 2A on Avenue A and East Second Street, welcomes Lenny Kaye and Cindy Lee Berryhill.

Treehouse proprietor Tom Clark is also on the bill, teaming up with his longtime friend Brian Halverson for a set of the "Never-Be Brothers." (It's a loving tribute to the Everly Brothers.) As always, the shows here are free on Sunday nights. (Start time: 8:30 p.m.)

Anyway, it seemed like a good time to check in on the Treehouse, which Clark launched upstairs on Sunday nights in July 2011. Via an email, Clark said that he wanted to create a vibe that was reminiscent of some of the places he had played in the good, old days when there weren't seven bands on the bill and the person running the show was nice and actually cared about the musicians and sound.

Has the Treehouse turned out as you planned it?

I have to say yes. It really could gone a lot of different ways in the beginning. It could have been insanely busy, then fizzle out, or it could have just fallen on it's face, like so many places have done.

I was lucky to know a good few talented people I could call on to get the ball rolling [for] the first shows, so a precedent was set of quality. Since the Treehouse is only on Sundays, I have to be kind of particular about the acts I choose because you only get four Sundays (usually) a month.

It's really grown into a nice destination on Sunday nights. No cover, a LOT of interplay between acts. Just good vibes. I hate to use that term, but that's what it is. I can't tell you how many emails I get a day from people wanting to play, and notes from people saying how much they dig it. I have every single show on video. I'm putting a site together now, where I'm gonna be posting clips.

A lot of really great venues have gone by the wayside — the original Sin-e, Banjo Jim's, Lakeside Lounge. It has hard to find places like those to play anymore.

What has been the best part of running The Treehouse?

I don't know about you, but I think having a job you look forward to is pretty nice. I get to watch and hear amazing songwriters like Lil' Mo (Monica Passin) and incredible guitar players like Fausto Bozza fingerpick like I could only dream of doing.

When I'm up in the little sound booth, I often turn around, just to survey the crowd, and it's a sea of smiling faces. That's really nice to see in this jaded day and age. I also love the fact that I get to play guitar with a lot of these cats. Always a thrill.

This Sunday is gonna be extra special. My pal Lenny Kaye is gonna play, and the lovely Cindy Lee Berryhill is in town from LA and asked if she could play. Then me my buddy since I was 13, Brian Halverson, are gonna do a set of Everly Brother songs like we used to do — and those damn songs are HARD, and we try to stay true to the originals. And then we will see what happens after that. That's always my favorite part. The stuff that's NOT planned. That's really where the magic is.

Clark, a guitar collector for years, also lends his 1949 Gibson J45 as the "house guitar."

"Most people, when offered, tend to go for it," he said. "Of all my guitars, it's my favorite, and you wouldn't believe how many musicians have never played a great guitar. I think at least 50 people have used it for their shows. I enjoy watching it be played. Guitars are happiest when they are played." 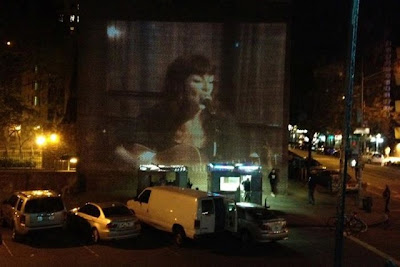 [Clark uses 2A's projector to show the performances on the wall across East Second Street. You have to be inside and upstairs to hear the music, though. Photo by Lauri Hornik]
Posted by Grieve at 6:50 AM

Email ThisBlogThis!Share to TwitterShare to FacebookShare to Pinterest
Labels: 2A, East Village bars, The Treehouse

great subject matter & great interview. thanks for the post and thanks to clark for all he does to keep the scene alive in the hood!

I'm glad the venue is successful and I look forward to going to it when I come back for a visit. After I get a "Wombacher" at Tompkins Square Bagel, of course!

Unfortunately the place that took over Banjo Jims, The Wayland is a nightmare. Another terrible place with an obnoxious crowd on Avenue C. Avenue C is the worst.

Yes! I love Lenny Kaye! (and Kevn Kinney is THE man. Wish I caught that.)

Yes, Kevn is the motherfucking man. Two of my favorite intimate shows in the EV have been Kevn at Lakeside on Valentine's Day a few years back and a solo show at Banjo Jim's that Lenny showed up for. He's out touring with Drivin n Cryin a lot these days. I could use another dose of acoustic Kevn in the near future.

Remember when live music in the EV was the point? of everything? I am glad to know there's still some out there.

Is Tom Clark still playing with his band? They opened for Patti Smith. couple of years ago. They put on a great show.

Yeah, Tom should mention his own band, The High Action Boys! He is a great musician and a fantastic guitar player himself (he has enough of them, so he better be!). Also, love, love, love that they project the shows onto the building outside. Such a cool touch! Great work TC!